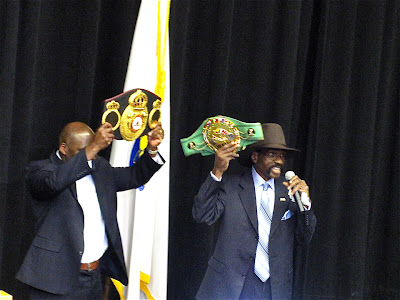 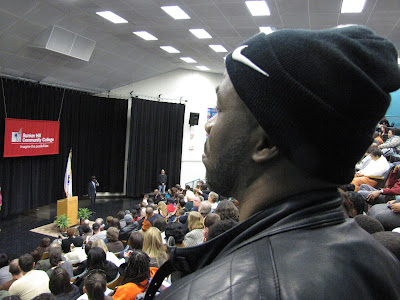 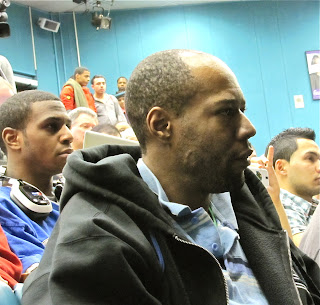 "Today is what it is because yesterday is what it was.... And tomorrow will be exactly what we make of it.
My opponent -- The United States of America -- was sharp and slick and always laughing at me."

Above is the trailer, yes I have some good footage from today as well, including pictures and conversation with two wrongly-convicted black men present in the audience (Shirley McGee and Walter Coleman), College President Mary Fifield and many others. look for a KingCast moving picture some time tomorrow, 25 March 2011.

See I was never imprisoned but NH AG cum U.S. Senator Kelly Ayotte sure did try to put me in a trickbag facing 7 Felony years and a $40K fine over the lawful exercise of my First Amendment Rights as Southern NH NAACP Legal Chair. Now I'm suing her for other First Amendment violations, see KingCast v. Ayotte, NH Dist. 2010-CV-501. Kelly Ayotte is a racist former prosecutor and yacht builder Michael Holman has the goods to prove it, watch our video from yesterday as he describes how Ayotte allowed the white, drugged-out mother of his three children to criminally endanger his son all the way to a coma after she let him out on a bicycle with no helmet. She then covered up for other NH LE who criminally charged him when he complained that they allowed her to sweep over to Seattle, WA on a jet airplane and take the children back from him as he was gainfully employed making good money as a yacht builder out there. To this day they have never shown him the paperwork that was filed to compel Police Chief John Pickering to take his babies from him and deposit them with a cracked-out mother where they were subject to sexual abuse and the aforementioned coma.


But that's New Hampshire for you folks. Take my advice if you are a progressive black, the best thing for you to do is get the hell out of New Hampshire because they definitely don't want you there whether you rent as I did, or buy a ski chalet as Mr. Holman did. And as far as Chuck Turner and his persecution prosecution goes, watch the video from last night. He comes first, then come the video for this presentation late night Friday.

Posted by Christopher King at 1:51 PM

They know I will not stop until I regain our rights. A bunch of guilty oficials exposed for their civil rights crimes....