Nashua Judge Diane Nicolosi does not care too much about Standing, clouds on title or missing assignments, when it comes to foreclosure the sun is always shining in New Hampshire!


Cross post @ Living Lies, "Why Judges don't want to rule for borrowers." Living Lies is an amazing resource for anyone seeking to learn about America's fraudulent mortgage industry. As noted in this Living Lies journal entry, "Good Video on KingCast: Pretenders Painted into a Corner," Merrimack Mortage twice-assigned Jeanne Ingress' Mortgage without receiving it back (this might not be true but there are many other questions, see below) no one knows where the wet ink note is. Yet this did not prevent foreclosure and apparent sale of her home. In denying unassisted litigant Ingress' Motion to Compel proof of ownership, New Hampshire Hillsborough South Superior Court Judge Diane Nicolosi issued a cryptic one-page decision that conveniently ignored all of Jeanne Ingress' salient points regarding the chain of title issues in her case, which may soon be joined by issues of Affidavit Fraud as in Tracey T. Wilson's case (Wamu/Deutsche Bank v. Wilson, NJ Appellate No. A-1384-09T1). I am in touch with the prevailing party in that matter.
I have not had time to run a full title search myself but I am considering hiring a title search company to do so because of the allegations Ms. Ingress raises in her email to me:

Merrimack made 3 separate assignments, including two to Option One; and two different companies made assignments to Wells Fargo.  Sand Canyon said it was FKA Option One, yet it was never named Option One in the state records.
AHMSI is the Attorney-in-fact for Merrimack and the Mortgage Servicer for Wells Fargo, yet it seems AHMSI gave them bad advice about making an assignment to Wells Fargo, when they had no standing to do so.  But ~ each assignment was for "good and sufficient consideration..."
So, although Merrimack may allegedly have nothing to do with the current foreclosure action, they set in motion this faulty chain of assignments, making it look as though Wells Fargo has the power of sale, when in fact Merrimack had no right to assign it to Wells Fargo in the first place, and even if they can prove they did have a right to do so, they back-dated the assignment.  And if Sand Canyon proves it was FKA Option One, they might be able to say they had the right to assign it to Wells Fargo, except that Option One had already assigned it to AHMSI; and then Merrimack got in between those two assignments and made another.  How can they re-assign it to someone when they already assigned it to someone else?
The other thing is that Option One and Sand Canyon were both out of the mortgage business when they were doing these things, and I was paying Option One when it was out of business and had no right to collect, then I paid AHMSI when the assignment to them was never recorded.  The clerk at the registry said nothing is legal until it's recorded, so they were taking actions in terms of collecting money and threatening foreclosure when they had no legally recorded assignments.
***************** 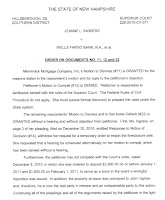 I figured this adverse decision would happen, as Judge Diane Nicolosi has been party to some other shady endeavors involving Arthur Ginsberg, she was allegedly involved with NH High Court Chief Justice Linda Dalianis in sua sponte changing the threshold for legal complaints in NH. See the video at the bottom of this entry from the NH Supreme Court rubber stamp confirmation hearings. Judge Nicolosi is a named Defendant in NH Dist. 2010-CV-452 that saw every local Federal Judge recuse. Nicolosi writes, "For the Reasons stated in their motion and in their reply...."

.....In other words, I'm too lazy to put it in my Decision, if I go into specifics people may argue that I am dodging the issues and I don't care that Merrimack Mortgage are part of a faulty chain of title....... that allowed foreclosure..... It's really wild because Her Honor takes time to delve into deficiencies in Ms. Ingress' pleading that have nothing to do with the indisputable fact that there are serious ownership issues involved here and they exist whether or not Ingress cites to the correct discovery rules. The burden of persuasion it would seem to me, must be on Merrimack to show that they are not part of a chain of fraudulent conveyances but hey what do I know I've only cleared title on dozens of wireless tower deals and been a mortgage company manager who closed a couple hundred loans, ahem.
**************
All across the Country a New Day is dawning and mortgage companies, service companies and lenders are being held to reasonable standards. As Living Lies points out, this means that Judges like New York Bankruptcy Judge Robert Grossman are holding that MERS is illegal. Here is Alan Ginsberg on the mic:
PS: Is this Merrrimack Mortgage? I'll run the ip addy. 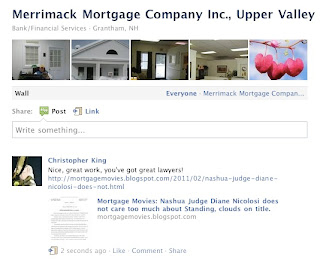 Posted by Christopher King at 9:41 AM