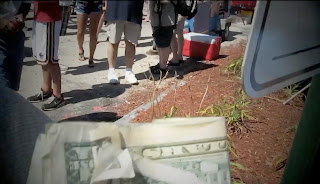 
Well I've been doing political/legal video for a year now so that's 200 folks a week, not bad for being an outsider. More to come I'm sure of that. If you thought Black History was already in the coldest, shortest month (and it is) then you ought to know by now that they wish they could freeze this Black History event out of the record books forever, just drive it on out of there as these racist cops drove me out of the entire Crowne Plaza Hotel for no lawful reason, ahem. It goes with yesterday's journal entry and the uploaded document is coming this evening after I make my raw footage highlight video. The Defendants were so concerned about my commentary and whatnot I told them "hey I've got no problem running raw footage, here you go, there you are."


29.            The Crowne Plaza is a place of public accommodation and is also subject to substantial State and Local licensing and permitting that carries with it as a matter of public policy the implied warranty that said permits and licenses will not be used to promote unlawful racial or Unconstitutional Conduct.

FOURTH CAUSE OF ACTION
Violation of RSA 354-A:16 Equal Access to Public Accommodations is a Civil Right.
The Statute reads, in pertinent part:
“The opportunity for every individual to have equal access to places of public accommodation without discrimination because of age, sex, race, creed, color, marital status, physical or mental disability or national origin is hereby recognized and declared to be a civil right.”
Plaintiff notes by way of the attached video that he was well away from "The Steak Out" and the leased GOP area, yet and still Defendant Hargreaves, with the unlawful and racially-motivated conspiratorial agreement of all other named Defendants, drove Plaintiff out of the entire Crowne Plaza Hotel despite Plaintiff’s clear admonition “I’m all set guys, this is no longer the event….. this is a place of public accommodations.” In their Motion to Dismiss Plaintiff’s First Amended Complaint, GOP Counsel Gordon MacDonald was not truthful to the Court when he wrote “To the extent police were involved, it was simply to enforce trespass laws…..” because there is simply no way that Plaintiff was trespassing in the Crowne Plaza lobby. One would hope that he was unaware of that fact at the time, but then what would that say about Nashua PD for failing to tell him the Truth? That does not bode well either way.


Related Van Halen Jam: DOA. They sent the Sheriff down to try to drive us away.....
Posted by Christopher King at 12:53 PM

Yah, just listening to Hargreaves bark at me with his contempt-laden attitude was enough to make me add him as a named Defendant once I found the extra footage of the public accommodations violation.

And speaking of contemptuous and condescending, Ryan Williams and Di Lothrop will join the fray as well.

I told Ryan I would wipe that haughty little smirk right off of his Hitler Youth visage, I wasn't joking.

I'm a spark on the horizon.