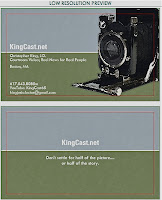 
And you had damn well better believe it will be a topic of conversation at next weekend's NENPA Annual Convention and Trade show, where I am a panelist on what constitutes journalism in 2011.


Posted by Christopher King at 2:27 AM

No need for a movie, Just saw the episode on southland other night, A scumbag killed a police officer who was doing nothing more than trying to uphold the law and protect the citizens where he served!!!!!!

I do not make a habit of defending cop killers nor does the NH Legislature make habit of refusing to name a road after a fallen officer.

As a former State Attorney I am telling you Bruce McKay was the scumbag, sticking a knife toward a woman's privates for no lawful reason and terrorizing anyone he did not like.

Keep an open mind. When this started I was entirely neutral and you can see that by my journal pages Hoss.