Why did big business dupe Kelly Ayotte ignore her own Senior EPA Staff Attorney Jennifer Patterson on writing an Amicus Brief in the successful case of Massachusetts v. EPA, 127 U.S. 1438 (2007)? 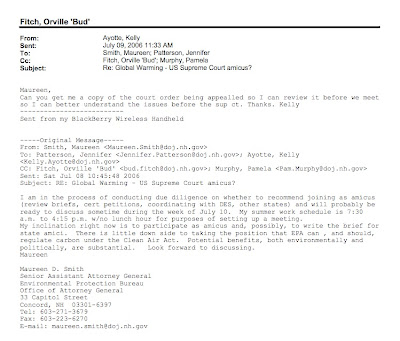 Dear Attorney Milkey (who is now an Appellate Court Judge here in Boston, I will hand deliver this to his chambers so he can see what a tool he was dealing with).
I am not surprised that NH AG cum U.S. Senator Kelly Ayotte declined to join your successful litigation. From the SCOTUS docket page it does not appear that this bought-and-sold big business wench followed the advise of her own staff attorney. Well when you review her documented legacy involving Unconstitutional DNA reporting for NH Youth, the lies she told about Greg Floyd in the Franconia shooting tragedy (one and two+movie) there are no surprises there, I guess. And she ignored the MBF leasing  scams that hurt many NH small business owners even though I specifically told her about it, now cases all over the Country are going forward.
And her slap on the wrist settlement in the asbestos matter in Bethlehem is patently insulting; I had that all documented in a prior Kelly Ayotte journal that somehow disappeared from the Internet, Scout's Honor. She nailed the driver and made a little settlement with the bigwigs. Small wonder she can't stand my narrow black arse strolling up to her campaign events mit der Canon in tow, hence her thrice-offered threats to arrest me, hence KingCast v. Friends of Kelly Ayotte free press racial lawsuit 2010-CV-501 (Complaint + Pending Memoranda) + Motion for Disclosure -- look at the influence and substantial contacts of Kelly's old firm McLane, Graf with Judge Landa McCafferty, simply astounding that I was not informed of this. She totally railroaded me in the TRO hearing but whatever, I've got a Constitutional Question here so the trip she avoided to SCOTUS with you she will now take with me. And that's hootlarious because she publicly stated that "Justice Kagan is not qualified."
Counselor, have a great and prosperous New Year, and be certain to share this information with all of your colleagues, because it is dangerous to America to have someone like Kelly Ayotte in any public office, much less enjoying the rarified air of the U.S. Senate, pun fully intended.
Take time to enjoy this BlueHampshire journal entry on Kelly Ayotte's enivornmental flippy-floppy, as well as the Kelly Ayotte videos at my YouTube Channel linked in the banner.
Sincerely,
Christopher King, J.D.
KingCast.net -- Reel News for Real People
Posted by Christopher King at 7:05 AM

Maureen, let's discuss before we get into this further because I have been thinking about
it and I am not inclined to get involved so let's meet at the beggining of the week so you
don't waste your time. Overall, I am comfortable with us staying out of the global warming
issue. Thanks for the update. Kelly
--------------------------
Sent from my BlackBerry Wireless Handheld

I am in the process of conducting due diligence on whether to recommend joining as amicus
(review briefs, cert petitions, coordinating with DES, other states) and will probably be
ready to discuss sometime during the week of July 10. My summer work schedule is 7:30
a.m. to 4:15 p.m. w/no lunch hour for purposes of setting up a meeting.

My inclination right now is to participate as amicus and, possibly, to write the brief for
state amici. There is little down side to taking the position that EPA can , and should,
regulate carbon under the Clean Air Act. Potential benefits, both environmentally and
politically, are substantial. Look forward to discussing.

They didn't even have to do any work....

The brief is currently due on 8/10, but we are likely to get a three week extension.

Since there will probably be only a few additional states joining on our side, the working plan would be to direct the states to join the brief being written by Tim Dowling. He did an extremely well-drafted brief at the cert stage on behalf of Mayors, Counties, APA, and
the City of Seattle. Thus, there would be no drafting work for NH.

How this creep gets away with these things KingCast and the town of Franconia will never understand, and NH AG Kelly Ayotte doesn't care.

In fact, she has no documents that indicate she ever considered reporting Floyd to ATF for violating 18 U.S.C. 922(g)(1) despite the fact that he openly stated during the Franconia 5/11 "investigation" that there was still at least one firearm at the house, and given his proven penchant for lying as noted in this post where I bust on Homicide Chief Jeffery Strelzin for coverup up for Floyd, she had every right and responsibility in the World to investigate that.

But she didn't because she is an irresponsible and bigoted public servant.

In this post I specifically outlined the reasons she should refer this matter to the Federal authorities on 24 October 2007.

"TFC Robert Bruno's report of the July 24, 1997 New Hampshire State Police executed Arrest Warrant and Search Warrant of the residence of Gregory Floyd (pp. 250-254) emphasizes that by being a convicted felon in the State of Georgia, Floyd wasn't allowed to possess firearms. Further, Bruno "...attempted to explain to Michelle (Floyd) that her husband was not allowed to possess guns in New Hampshire or Massachusetts as a convicted Felon."

All of that is ILLEGAL.

Innocent people are dying. Guns make it too easy to kill. Period. Please sign this petition because we need to convince Senator Ayotte to vote for any upcoming legislation to ban assault weapons, which she currently opposes. Tell everyone you know to sign. It doesn’t matter where you live, her vote affects us all. Thank you.
http://www.change.org/petitions/kelly-ayotte-make-assault-weapons-illegal?utm_source=guides&utm_medium=email&utm_campaign=petition_created