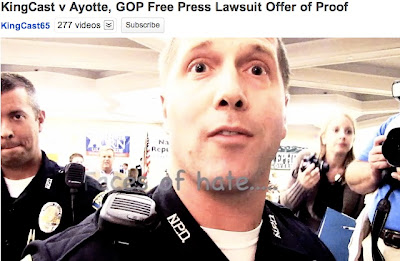 The Defendants are pissy because I used some passionate rhetoric they consider to be "unprofessional." What I said was that the Defendants' failure to substantively respond to my cited case law until they wrote their reply Memoranda "arguably smacks of lazy lawyering or outright gamesmanship and should earn no quarter before this Honorable Court."
I am pissy because GOP Counsel Gordon MacDonald willfully misrepresented the material elements of my Amended Complaint (not to mention my Memorandum in Opposition to their Motion to Dismiss), prompting me to prepare to file this Rule 11 Rule 3.3. Motion for Sanctions. And all Defense Counsel have on prior occasion omitted key elements of my pleadings, which prompted me to draft a Rule 11 Motion that I withdrew in the interest of keeping the peace, blah blah blah. No more peace. Just Justice and open disclosure.
And another thing:
While you all may not appreciate my passionate litigation, I don't appreciate being threatened with arrest, even above and beyond the alleged call of duty to remove me from a rally.
You all have run your intel on me so you know I don't come from a place of criminality. I got educated in elite prep schools and at Case Western Law so I could AVOID becoming a criminal, only to see your buddy Kelly Ayotte and her fascist pig loser friends like Marty Dunn and Messrs. Hargreaves and Fisher try to make me a criminal.
And as a former Law Enforcement Attorney to see you guys leaving out major substantive portions of my pleadings in your responsive Memoranda to cover it up doesn't sit too well with me either.
Query, have any of you ever been threatened with arrest?
It's not any kind of fun, no it isn't.
And I'm not going to tolerate that in my life, ever, and that is why we will be briefing this case to SCOTUS.
I believe I have made myself clear.
Christopher King, J.D.
http://KingCast.net -- Reel News for Real People
617.543.8085m

Well I'm not done yet because in point of fact, I forgot that I even made this issue of the GOP instructing racist pig Hargreaves to eject me and proving mutual plans of action and Conspiracy very clear by way of a stop frame at 6:50 of my Offer of Proof Video as filed with my Amended Complaint, see the attached screen capture.
http://www.youtube.com/watch?v=pGyIhFGrQrE&feature=player_embedded
"The people here are asking you to leave."
The people running the event of course were the Republican Committee Defendants represented by Attorney MacDonald, so I am making a video about this issue so I can read this email into it and share it with whomever I desire. And I catch you doing it again I'm going to repeat as necessary.
And I'm sure you knew about it because you all took painstaking effort to review the videos I provided in an effort to strike them. There is simply no excuse for Attorney MacDonald's mislead to the Court.
So yah you better believe I'm filing for Sanctions unless Attorney MacDonald recants. This is a material issue folks, not like whether I was wearing a blue shirt or a black shirt, but whether the GOP and Nashua PD and Friends of Kelly Ayotte reached agreement that I was to be ejected from an event for any reason whatsoever.
--
Christopher King, J.D.
http://KingCast.net -- Reel News for Real People
617.543.8085m
Posted by Christopher King at 10:49 AM