KingCast Go to Hell letter to Michele McPhee: You, Howie Carr and the Boston Herald are racist tools of oppression, and proper subjects of successful Defamation lawsuits. 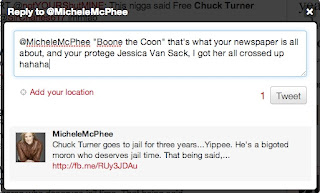 First you need to read Wendy Kaminer's  the Atlantic feature,

I'm sure you don't like me or my Chuck Turner coverage. And I don't like you or your junky racist newspaper. But when it all comes down, at least I've never been successfully and repeatedly sued for Defamation. In point of fact I've never been sued for Defamation because unlike Howie Carr I know who I am writing about. And unlike Jessica Van Sack, I know what I'm writing about. And as to the fact that you and Howie Carr are business parters with Casey Sherman, who notes that I "literally helped him write "Bad Blood: Freedom and Death in the White Mountains," (he says so at 4:40 of the bottom video) I really couldn't care less. Frankly I was shocked to discover that he runs with lowlifes like you, but hey it's all right as long as he disinfects his hand before I shake it next time I see him.

Posted by Christopher King at 11:29 AM

Civil Rights speeches on the news. Talking of past intimidation on homosexuals.
A little unfocused. Homos hate your guts::::As you showed up to vote for Obama you passed Proposition 8, outlawing gay marriage. Don't bother.
Intimidation, in school and in society in general, was an EXCELLENT tactic in keeping people from envoking the god's ire with sexually deviate behavior. In the absence of this tool of enforecement these disfavoreds have nothing to be afraid of, and people who otherwise would avoid digging this hole throughout their lives are now getting into big trouble, the likes of which they may never recover from.
Anti-gay sentiment served a VERY important purpose in society, a benefit which no longer exists and ironically another element contributing to societal decay.
Black intimidation illustrates an OUTSTANDING example of "reverse positioning":::::
In the days of segregation there were pressures on the black community to "behave", pressures which no longer exist. Actually, it served as a good substitute for Islam, a religion whose strictness helps the believers toe the line, a MAJOR problem among blacks.
Ironically, this intimidation was substituted for Civil Rights, planned and inflicted on the black community by the gods through the Italians. Now they eat what they are fed. And it is killing them.
The deterioration which has occurred in the decades since has DEVESTATED the black community, but since the gods have positioned coinciding increased weath the people believe times are improving. Rather, they are falling further out of the god's favor with their behavior, now financable, evident by the community in decay during past crisises (crack epidemic, gang violence, massive drug use, pre-teen prostitution, etc).

If people only understood the importance of good parents. You won't be going anywhere without them. And it won't happen unless you are one first.

"The West Bank, where the end of the world will begin." This happened 2000 years ago.
The Church controlled Western Civilization. As the largest land owner in Europe they controlled the monarchies. They were responsbile for slavery, revenge for African invasion and rape of Italy. They created religious discontent, ultimately leading to the disfavored dumping ground known as the United States.
And each generation of these Italians were sold on "earning", only to be reincarnated as a lesser life form subsequently, punishment for their evil.

Another feature which the Gods offer as a clue is very foreboading and ominous. Mt. Zion is a mountain to the north of Diablo (the eye of The Beast) and one which has a working quarry at its base. Consistant with the decay we experience in society, Mt. Zion is being eaten away, slowly stripped of its resources, until one day paradise will be gone forever.

You are not to help my enemies. It is a simple request, of which you have granted little.
Good for nothing.

Ummmm..... I have great parents and do not practice hatred of anyone based on any immutable characteristic, religion or sexual orientation, quite the contrary.