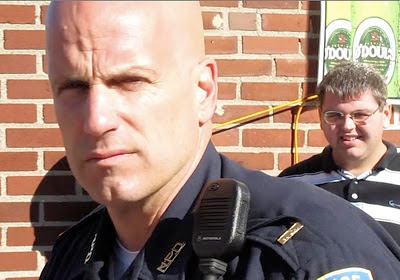 May it please the Court:
While we are dealing with this case on the Pleadings -- a fact that Defendants seem to forget -- the fact remains that Discovery is the only way to get to the bottom of this. In point of fact in Plaintiff's Motion for Reconsideration on Magistrate McCafferty's Report and Recommendation, he noted that  Lieutenant John Fisher harassed him on the sidewalk for no reason, and treated him differently than other white people who stood closer to a backing car. Proof of this is seen in the attached video and in the picture.
But there is a pattern and practice of such lies, as I have noted in theMichael Paulhus investigation where Nashua PD and/or Staties destroyed evidence, and Plaintiff Michael Gorsuch will tell you in case no. 2010-CV-495, filed right before my case at 2010-CV-501. The Nashua Telegraph's Andrew Wolfe noted on Friday, 10 Dec. 2010:
Fatal crash passenger sues police for prosecution
"Gorsuch and his lawyers charge that Maloney and other police accident reconstruction investigators ignored other evidence that pointed to his innocence, such as Rodriguez’ shoe found near the gas and brake pedals, and Gorsuch’s Red Sox cap, found pinned within the front passenger side airbag."
“Despite the fact that three technical accident reconstruction experts, each of whom was properly trained to conduct passenger kinematics analysis, all had concluded that Rodriguez was the driver and Gorsuch was the passenger, Fisher, Maloney and the Nashua Police Department procured the institution of further legal process in an attempt to ‘get’ Mr. Gorsuch,” his lawsuit states. “Specifically, they prevailed upon New Hampshire State Trooper Carleen Bowman and Trooper Mark Nash to prosecute Gorsuch in an administrative hearing designed to take away Gorsuch’s right to drive in New Hampshire. Like the criminal prosecution that preceded it, this bad faith attempt to ‘get’ Mr. Gorsuch failed.”
Similarly, Lieutenant Fisher was bound to make up the rules as he went along in Plaintiff's case. He had no right to talk to Plaintiff when Plaintiff was already following his orders, and when Plaintiff asked him "Do you mind if I ask the Candidate a question" he said "No." See "Senator-Elect Kelly Ayotte attacked by Dangerous Black Man from the NAACP"
at 8:22, Exhibit __ http://www.youtube.com/watch?v=zzAXP3DniDY. As such, we can see that Defendants' Motion to Dismiss is merely an abusive and baseless attempt to skirt the issues countenanced in this case, while playing on the sympathies of a conservative bench and former colleagues and underlings (i.e. Magistrate Judge Landya McCafferty) as noted in Plaintiff's Motion for Disclosure.
Lastly, on a related note, the testimony of former U.S. Marshal Stephen Monier, who is involved in a Federal lawsuit for lying about Ralph Holder and falsely accusing him of being a fugitive from Justice, was and is suspect. He flat out lied at 6:09 of this video

at Exhibit __ http://www.youtube.com/watch?v=zzAXP3DniDY when he called the police because Plaintiff is on "private property," when in point of fact Plaintiff was standing on the sidewalk. A Jury is entitled to determine his bias, as he works for Ayotte and is her Special Assistant for Veterans, Law Enforcement and First Responder Outreach. May the Court recognize that bias and witness credibility is always at issue.
Posted by Christopher King at 8:01 AM

The Bad Lieutenant is keeping Counselor Cullen busy these days.

Regarding Monier calling the police while you were on the sidewalk.... it's worth pointing out that it is not illegal for a person to enter completely private property, be told to leave, and then leave. Nothing illegal in this. And Monier knows it.

We are also watching this case with a lot of interest...

Top of the morning Counselors,

First of all Attorney Delaney, I'm looking forward to reviewing that full file on Mr. Holder i.e. "any documents bearing his name" ASAP, it's about That Time.

Attorney MacDonald, I will finish my Memorandum Contra your client's Motion to Dismiss later today or tomorrow, these responses to Nashua PD and are 99% complete pending one last review. I want to make certain I didn't Gerrymander your statements of fact and argument, as you have attempted to do to me. The Motion for Rule 11 Sanctions will accompany. You guys wanted to fight, well by golly you've got a fight.

By the way, it took me four years to get justice for Michael Isreal as noted in the pleadings, when those cops caused him to be a victim of violent crime so I'm in no hurry. We can all sit back and enjoy the ride.

See you at SCOTUS.