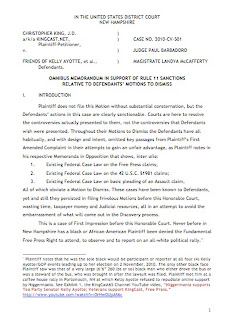 Note: At 8:18 this morning McLane, Graf Mclane Law Firm (64.61.32.55)  searched Jon Sistare's name and read this journal entry about Meshugana Marty Dunn, the proved liar who - along with their buddy and client and former employee Kelly Ayotte - contrived a bogus case against me as NAACP Legal Chair.


Final Memoranda to be posted this evening, and these are tight Memoranda you better believe it. I even had a couple of First Amendment Boston Attorneys review them, and they are Good-to-Go. There is simply no way in Hell these claims should be dismissed, and the Defendants know it that's why they selectively quoted my Complaint allegations.
What you see will shock, then ultimately disgust you.... because it is our money that they are ultimately wasting, all in an attempt to stifle Free Press, especially the Free Press of a Progressive Black Man who is Dangerous only in the sense that he tells the Truth.
And the Truth is, McLane, Graf's Jack Middleton was Kelly Ayotte's boss and Magistrate Judge McCafferty's boss, and his Law partner and co-counsel I believe was there during both McCafferty and Ayotte's tenures. And I believe that Jack Middleton wrote at least one letter of reference for Judge McCafferty's ascension to the Federal Bench, you don't just waltz up in there unannounced, you know. You can't just crash the Party the way I did. Here's the KingCast Motion for Disclosure.
More Truth to be told on Capital Access TV tomorrow.

Posted by Christopher King at 1:11 PM

Apparently they thought they were dealing with an amateur.

I would have loved to have been at a Rolling Stones show in the early 70's more than Pink Floyd, Zeppelin, or almost anyone else.

I wonder what Kelly Ayotte's Niggermania supporters think of him, he sure does have those nigger lips, don't he?

You have to think about how much this case means to them, to allow me to expose the dirty games they play and their hidden alliances and to actually go to the friggin' U.S. Supreme Court over a little journalist asking Kelly Ayotte a couple of questions.

That's because it's not about that.

It's about the GOP needing to own the media that reports on them.

Well that plus the fact that Kelly can't stand a n****r like me exposing all of her malfeasance through the years, and kicking her ass in the bogus charges she and Marty Dunn foisted upon me a few years back when I was NAACP Legal Chair, exercising my First Amendment Rights to journalize police abuse against a black man named Willie Toney.

Toney took 3 loaded service pistols to the face and a visual body cavity search for LOITERING, mind you.

That little whore has got to pay the price for these crimes.....