KingCast Memorandum Contra Dismissal rips Jack Middleton for lying in his Motion to Dismiss, he failed to distinguish NAACP v. Thompson, 648 F.Supp. 195 D.Md.,(1986) because he can't. All he can do is blow hot air. 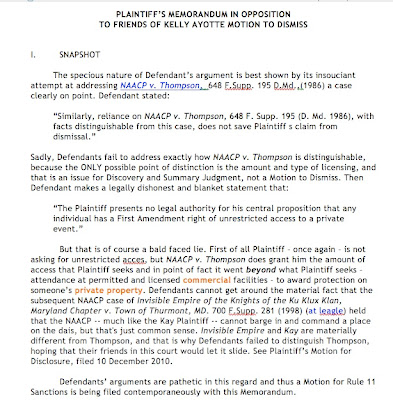 So he's a big shot blue blood lawyer who was Judge McCafferty's boss. So he's a big shot blue blood lawyer who was Kelly Ayotte's boss. See the Motion for Disclosure. I don't care about any of that, he can't lie to me and get away with it. If Judge Barbadoro grants his Motion to Dismiss it will come right back to him by the time I'm finished, because the Defendant's argument is absolute garbage, it doesn't even pass the giggle test, save it for Summary Judgment, after the embarrassing Discovery Process that is going to show that the Friends of Kelly Ayotte, the GOP and Nashua Police acted in concert to deprive me of my Constitutional and Statutorily-granted Civil Rights.
Then on the 42 U.S.C. §1981 claims, Jack just omitted most of Plaintiff's complaint paragraphs and presented it to the Court as if that's all that was stated. That conduct is wholly sanctionable.
D.            The 42 U.S.C. §1981 Claims.
First of all, the offer to sell and to purchase a ticket at a VFW contemplates 42 U.S.C. §1981 when denied to someone in the protected class, and there’s no two ways about that, especially because Civil Rights Statutes are to be liberally construed in order to effectuate their remedial purpose. See Williams v. Le Crewe De Spaniards, 2009 U.S. Dist. LEXIS 4852 (2010) specifically on point, as well as common sense.   Defendants need to be sanctioned for Gerrymandering one sentence out of three whole pages of distinct racial claims over the past several years the culminated in the acts complained of herein. Defendant cited only this passage:


"Defendants' conduct unlawfully targeted a black man in a place of public accommodation, and set up terms of engagement that were unequal to him in comparison to his white counterparts .... "

That is sufficient pleading in and of itself, yet there was more. Much more. Take a look at three (3) different offers to obtain tickets from my Memorandum Contra, it shows just how  much unbridled hubris these guys really have. It's appalling. Simply appalling. 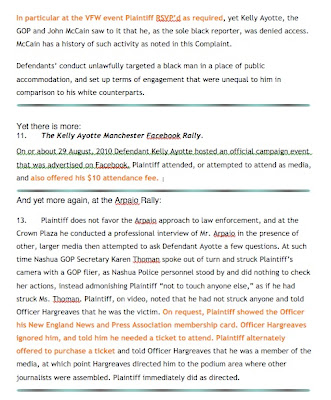 E.      The 42 U.S.C. §1985 Conspiracy Claims.
Once again Defendant's argument is feckless, nonpersuasive and not grounded in any Law or Common Sense. Defendant writes:

"Here, Plaintiff has not pled sufficient facts to substantiate any claim of conspiracy.    Contrary to the Plaintiff s contention, Defendants did not "work together in acknowledged Conspiracy" to deprive him of some constitutionally protected privilege. Amended Complaint ~ 19. For example, at the first campaign event upon which Plaintiff asserts his claims, Nashua Police Officers were not present."

Of course that would have no bearing on the other Defendants conspiring at the Facebook Rally then, would it? Of course not. Discovery is needed in order to determine the Communications between the Defendants at each event, and the videos clearly note that:
a) Officer Hargreaves told Plaintiff the "The people holding the event want you to leave" at _____;
b) Lieutenant John Fisher -- a named Defendant in Gorsuch v. Fisher et al, 2010-CV-495, stated "The Campaign told me you are not welcome here," at _____ so obviously they were working together at the Crowne Plaza and the VFW as well. If they agreed on a Course of Conduct that violates the law set down by Thompson they then have exposure under 42 U.S.C. §1985 for tramelling a Fundamental Right, i.e. Freedom of the Press, this is simple, basic Pleading.  Plaintiff has successfully sued police in similar cases and is quite familiar with the Standards of Pleading and having Police Officers found liable for making someone a victim of violent crime, see Isreal v. Rhodes & Hensley, Ohio Court of Claims V96-61481.
I'll be All Set with these Memoranda by Monday or Tuesday and slam them home, watch this space.
Posted by Christopher King at 8:33 PM

Top of the morning Counselors,

First of all Attorney Delaney, I'm looking forward to reviewing that full file on Mr. Holder i.e. "any documents bearing his name" ASAP, it's about That Time.

Attorney MacDonald, I will finish my Memorandum Contra your client's Motion to Dismiss later today or tomorrow, these responses to Nashua PD and are 99% complete pending one last review. I want to make certain I didn't Gerrymander your statements of fact and argument, as you have attempted to do to me. The Motion for Rule 11 Sanctions will accompany. You guys wanted to fight, well by golly you've got a fight.

By the way, it took me four years to get justice for Michael Isreal as noted in the pleadings, when those cops caused him to be a victim of violent crime so I'm in no hurry. We can all sit back and enjoy the ride.

See you at SCOTUS.