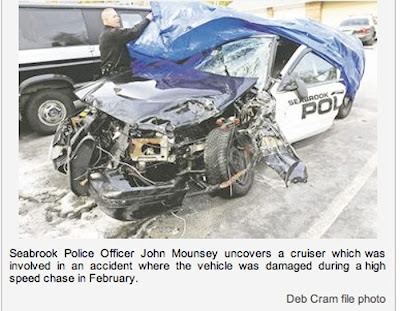 At the outset I will note that the violations of pursuit policy and excessive force from 2007 ring true in the Liko Kenney lawsuit, 2010-CV-181 from 2007 that nobody is writing about..... and NH LE Jeremy Tetrault clearly violated the State Rules on pursuit again in February 2010, and he did it because Kelly Ayotte never investigated Tetrault's or Bruce McKay's pursuit violations in 2007 because she is a Right-Wing Fascist Pig who protects bad police, as I have been noting for years now.

Seacoast Online's Elizabeth Dinan, another NH LE abuse victim, covered this year's car crash debacle after a Judge denied access to the files and Governor Lynch signed a law exempting State-owned (but not municipal vehicles......). Wow, I was out of town this summer during most of these proceedings, glad to be in the loop now though. New Hampshire protects Law Enforcement way too much, and it goes back to the Dow Murders, when Dick Down undoubtedly murdered his wife and adoptive son and got away clean in 24 hours.

Note further that there is no record of the NH AG's office disciplining this jackass when he clearly could have killed someone over 3 women on a crack binge that I told you about back on 10 Feb. 2010 in this News of the Weird entry.

I'm reading the Soucie Complaint now on Pacer, perhaps I will post it later, for now enjoy the book signing session with Casey Sherman, retired Franconia LE Bradford Whipple and Yours Truly. Unlike Liko Kenney's complaint, which I will definitely post soon, it is not a specific complaint so nobody's going to learn much be reading it, basically an excessive force case. Apparently the cops involved either shot and/or tazered a man in a felony stop after it was clear he was not a flight risk.
Anyway, the NH AG Office covers up the truth about these situations, in the Michael Paulhus case AG cum U.S. Senator Kelly Ayotte allowed violation of miranda and destroyed evidence when Nashua Cops fired into a van, and that's a FACT, ready the Paul Erwin Kish Forensic Report, after which the Civil case was settled at $80K; the Union Leader called it "hush hush"
http://kellyayottesenate.blogspot.com/2010/11/kingcast-informs-us-senate-and-scotus.html
Sunday, November 21, 2010
KingCast informs the U.S. Senate and SCOTUS Justice Kagan: Senator-Elect Kelly Ayotte and Jeff Strelzin lied about the Michael Paulhus shooting documents they had.
********
And of course Kelly Ayotte continues to hate free press and KingCast telling you these facts, so she threatened to arrest me 3 times so now she is facing this lawsuit with the rest of her GOP and Nashua PD buddies.
http://www.wepapers.com/Papers/125524/KingCast_v._Ayotte_True_Final_First_Amended_Cpt_Senator_Kelly_Ayotte_is_a_Racist_Free_Press_hater.
And Liz Dinan, author of this piece, knows all too well about Kelly's band of legal pranksters, Kelly let Fred Hoysradt off the hook after he assaulted her after knockin' back a coupla' Captain Morgans, yah.
http://kellyayottesenate.blogspot.com/2010/10/did-kelly-ayotte-teach-her-protege-dan.html
As noted in this KingCast video:
http://www.youtube.com/watch?v=hRUidI2H_g4
Liz I hope you sued,
Peace.

Posted by Christopher King at 4:16 PM