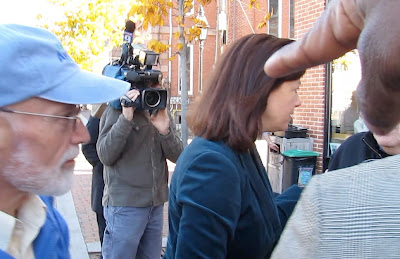 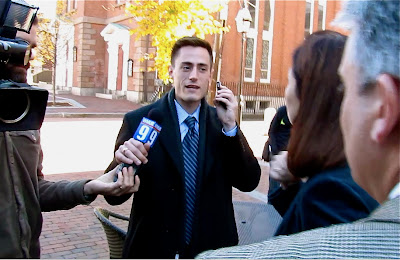 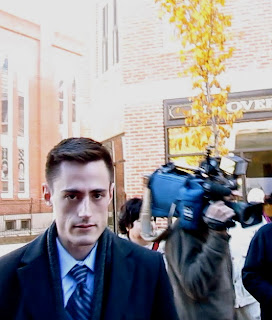 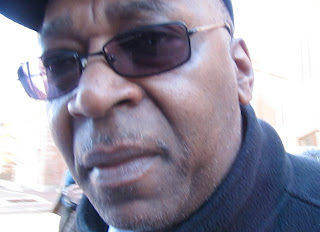 UPDATE: 10:00 a.m. hearing in Federal Court, 2 Nov. 2010. Dig the look of contempt from that Big-Media dude from WMUR, LOL caught ya' lookin' pal. You guys never show me but I show you, ahem. What's your name? Who cares, there's another one like you right around the corner anyway.


Kelly Ayotte and the GOP treated me differently than other media from the get-go,  I got hip-checked and talked over and even when I was 100% equidistant from the object (Kelly Ayotte) as WMUR Channel 9, this Big Token Black Guy (a/k/a Butler House negro) kept chattering in my ear and trying to distract me. Look at the screen capture and you can clearly see I am equidistant from Kelly as WMUR. I'm sure the Jury will see that as well.  Then he interrupted me again to complain about my use of the word Niggermania, when the question is whether Kelly Ayotte would repudiate Niggermania support for her candidacy, and she flat out refused to do that but this House Negro is too stupid to get his arms around the concept.

Anyway, it's Unconstitutional interference and I am going to share that with the Court in KingCast v. Kelly Ayotte, GOP and Nashua PD, which is now Federal Case number 2010-CV-501, after it was filed as 2010-E-333 in Hillsborough District Court, Removed to Federal Court Judge Paul Barbadoro as 2010-CV-492, Remanded to Hillsborough and subsequently Removed again to Federal Court as 2010-CV-501 before Judge Steven McAuliffe. All this and +$400 just because I want the right to ask Kelly Ayotte a couple of questions without threat of arrest, as noted in the Offer of Proof video, at bottom.
Kelly Ayotte ignored my relevant questions about racism and her Niggermania supporters, her deleted emails in blatant violation of RSA 91-A Right-to-Know, and the pending Federal lawsuit of Estate of Liko Kenney v. Gregory Floyd et al., 2010-CV-181, before Judge Barbadoro.
More pics and video coming soon, but they try to imply that I am a physical threat, with the Big Token Black guy actually telling me not to hit Kelly Ayotte with my camera or some such dumbness. I no more want to touch her than I want to walk into an open Lower Manhattan sewer. Hah, in point of fact as Steve and others on the campaign are now aware, I am friends with one of the Republican bodyguards who shall remain nameless in this space.
Posted by Christopher King at 11:20 AM

Wow, you don't come across as a kook at all!

Watch the Butler chase me around in the WMUR video, and note the reporter is on the bus with Kelly, a total plant.

Screen caps:
On the bus.

If asking Kelly Ayotte if she really thought that her emails were not subject to RSA 91-A Right to Know makes me a kook, then I'm a kook and proud of it.

What's your excuse, you anonymous tool?

Call SCOTUS Associate Justice Elena Kagan a kook too, because she follows my tweets.