How many Kelly Ayotte NH Superlawyers and support staff does it take to try to crush Christopher King, J.D. and KingCast.net Fundamental Free Press Rights? 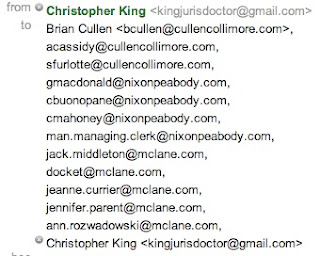 Well it looks like a total of 12 as I predicted to the folks over at Ridley Report. So the gang's all here, and here is the cake I'm bringing to the SCOTUS party.

And what do they plan to do with this:

Pruneyard at 81, 100 S.Ct. at 2040 (citations omitted)......
It may well be that Mr. Kelly, by opening his private farm property to the public for a Klan rally did not bestow upon attendees of that rally any right to speak during that rally or to require the Klan to call upon anyone to speak at the rally other than as the Klan desired. But, herein, plaintiffs do not seek the opportunity to speak at such a rally; rather, plaintiffs complain herein of being excluded entirely from attending such Klan rallies. [KingCast notes: That is precisely the distinction he is making between Kay v. Bruno, 821 f.2d 31 (1987), and his desire to merely be present and to gather news. A trip to SCOTUS does indeed loom large for Kelly & Crew.]

............But, “by choice of its owner,” the property was, on the occasion of each Klan rally, made “open to the public.” Having made that “choice,” the private property owner cannot complain that he has been deprived of his privacy, or of his freedom to use his own private property as he desires, if he is required not to discriminate among the members of the public by excluding all persons belonging to a particular race or to a particular religious group. A private property owner can surely invite whomever he selects to attend a private gathering on his property. But when he offers his private property to the public, he has placed himself in a position which enables the government, if it so desires, to impose certain requirements upon him. [KingCast note: My offer of compromise did not include the Ayotte home. It was, and is, a valid attempt to balance private property rights against matters of public interest. That's because I know what the hell I am doing when it comes to the First Amendment, the name of the blog is the name of the game, folks. Wouldn't it now be hootlarious if SCOTUS determined that a publicly advertised rally at Kelly's house must be held open to me?]

If, as in Pruneyard and in Hudgens, a state or federal statute can require a shopping center owner to permit certain solicitation or picketing within the shopping center, then there would appear no federal constitutional barrier to Frederick County requiring the Klan to hold an open-to-all, non-racially, non-religiously discriminating, public rally on private property before issuing a permit. That view is supported, though probably not compelled, by Chief Justice Burger's comment in Norwood v. Harrison, 413 U.S. 455, 93 S.Ct. 2804, 37 L.Ed.2d 723] (1973):

Nothing. Absolutely nothing. They can try to ding me up on all of this other nonsense, about how I'm allegedly threatening the candidate and such, but the Constitutional Question will always be there for them, and for the Court of Appeals, and for Cert.

If they want to go there, I'm like the Staple Singers, I will most assuredly take them there, all because I want to ask Kelly a couple of questions.

Isn't that something, I mean, REALLY?