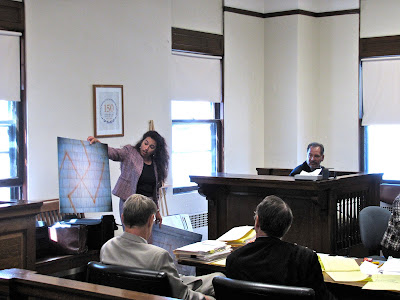 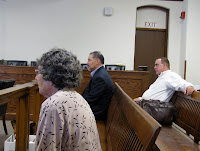 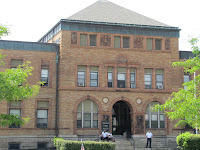 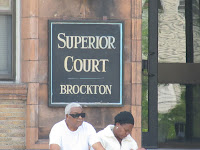 "I'm accused of being a horrible person," volunteered Long Pond/Hemlock Association Defendant Bren Ladino this morning. This relates to this Boston.com ancient coverage (where are they now?) and this one from Enterprise News (same question).

This is a case so foul that even seasoned court personnel looked on in shock and utter disbelief. The video is coming. Wait for it.

"Mr. Pedranti said 'you shouldn't stick your nose in other people's business,' and he said he had 'friends in Boston I wouldn't want to meet....' I said excuse me? Are you threatening me? He says "Did you grow up on the water?" "No" "Then you don't know what a buoy is... it's a dead fucking thing that floats in the water, and you wouldn't want to find yourself being a buoy would you."

Pedranti then walked off to Defendant Ladino's home.

Scott Hyman worked hard, bought his own little island at Lakeville Long Pond and started to rehabilitate existing structures in order to build a place where he could live in "peace and quiet," as he testified today at Brockton Superior Courthouse. Instead he was met with death threats, swastikas, picnic tables through his window, theft and an application of urine and feces smeared throughout his new home. There is an access/easement property dispute at hand, but behind, around and even perhaps in front of that matter are the alleged Civil Rights, nuisance, trespass and emotional distress claims mounted by Plaintiff Hyman, and they reflect extremely disturbing, inhumane behavior of the lowest Order.

As someone who has lived racism in housing (we were some of the first blacks in Cleveland Heights in 1970 and involved in Heights Community Congress v. Hilltop Realty, 774 F.2d 135 (6th Cir. 1985), cert. denied, 475 U.S. 1019 (1986)), and as someone who has successfully litigated Housing Discrimination (Hamm v. Gahanna) I took a keen interest in this case and plan to report on it as much as time allows. What if he were black? Same thing. It wouldn't surprise me if there were restrictive covenants to prevent "Kikes" and "Niggers" from owning that property in the first place.... It gives me the creeps, right here in good ol' "liberal" Massachusetts.

Having attended Hawken, a largely Jewish-attended prep school in Cleveland (fun visit video here) most of my friends were and still are Jewish. And while we may have disagreements over the Gaza Strip or other Mid East matters, if anyone ever harmed them based on religion or race I would have their back, totally.

I wish I had time to attend the entire trial but I have obligations to my nonprofit group, but fortunately I was able to get some of his direct testimony this morning and am working on a raw video montage. Everything in this piece will be raw, no photoshops whatsoever, as befits the occasion. Enjoy the stills, I'm working on the video now and hope to have it up before I leave for my nonprofit activity at 4p. Having hosted a Hate Crimes forum with noted Civil Rights lawyer Terry Gilbert and Ohio former AG Lee Fisher (both of whom I clerked for in law school), I am appalled. I was appalled when it happened to my brother Michael Goldstein in Nashua, NH a few years ago, and I was appalled when it happened to then-UMass Amherst student Jason Vassell, in a case in which a racist prosecutor named Elizabeth Scheibel actually went after the victim, eventually dismissing all charges against him while not even prosecuting one of his drunken white attackers, watch the video.

Posted by Christopher King at 9:16 AM

I see the picture of the swastica. Was there more evidence of anti-semitism?