KingCast presents: Some pretty images from NH and an ugly man from an undisclosed bunker, spewing vitriol. 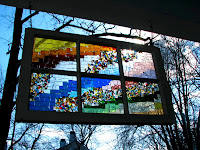 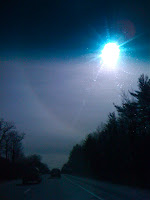 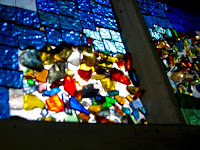 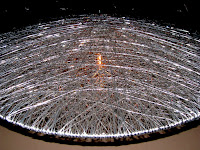 So...... I was driving down 89 last week and saw that huge sun ring, everybody was snapping pics of that. And yesterday I was visiting some friends on my first ride to NH and saw some cool outdoor images from my friend's porch. Then I saw another interesting image at Haru Sushi when I stopped for sushi later in the evening, it is one of the lounge lights on the wall.

So in this post about the FACT that Judge Peter Cyr tossed several Fox Hill Park cases for Fourth Amendment Constitutional violations, some tool who is obsessed with this blog wrote in. The following colloquy ensued:

"I hope that dipshit chris king stays the hell away from my case. (fasano). Credibility is ruined at the sight of his face".

Think again, and try breathing through your nose as you do it.

It will be a first time on both counts for you.
-The KingCaster.

PS: There are about to be some negotiations going on in Ohio, since I know you're oh-so-interested.
By Blogger Christopher King, at 7:38 PM
**********
Just making a simple point that no one wants you around. You are an obstacle by choice. Gotta go get some more quotes from upstanding citizens about the king loser. P.S stay out of the bury no one wants you there either. 80 BPD officers at Cpl. mckays funeral. I believe they are all well aware of your anti-police rants by now.head for the hills bitch and start speaking out on behalf of the Taliban. Take whipple with you.
By Anonymous, at 9:16 PM
**********
Sorry not a fan of the Taliban, not a fan of you and still don't care what you think.

But thanks for the quote, it is the subject of a new blog post.

PS: Your biggest question is who plays me in the Bad Blood movie, ahem, 'cos a rumor has it that such a venture is forthcoming.

Forthcoming, use it in a sentence:

"The memo you promised KingCast is still not forthcoming, nor are you forthcoming about your identity because you are a creepy LE who hasn't yet learned to breath through his nose."

Besides, I tend to take Casey Sherman's viewpoint of me above that of Jackie McGlone, watch what he says in this video at his book launch, and read what he says in this excerpt from his book, that's why you're hatin' on me dude [Note: Read the comments for more, much more].
Posted by Christopher King at 2:16 AM

p. 212-213 "One could argue that the evidence to warrant such an (new) investigation against Floyd had been there from the very beginning. Kelly Ayotte has been and will forever be roundly critized for her rush to judgement regarding Greg Floyd. The Attorney General painted herself in a corner in her apparent need to paint Floyd as a hero. Had Ayotte shown the proper patience in the case, she would have discovered quite early the serious questions surrounding Floyd's alleged heroic deed." [KingCast observation: She is in charge of the investigation and such knowledge is imputed to her]

1. "Greg Floyd's initial testimony that he never warned Liko Kenney before he fired the fatal shot. (This detail was corroborated by Kenney's passenger Caleb Macaulay)."

2. "Floyd's bizarre behavior and statements," including killing as many as "43 people for the government" and current legal drug use vis a vis his conversation with Caleb "Sir you can't shoot me you'll be charged with murder," to which Floyd responded "I'm on medication so it won't matter."

3. Greg Floyd's penchant for violent behavior had been well established by police before the May 11, 2007 shooting.

"There is no question in my mind that Greg Floyd's actions in the case should have been examined more closely."

And of course the windshield bullet goes without saying but it's all wrapped up in the package and that's part of the reason why Casey took a picture of it that appears on p.114 with the caption: "The author was taken here by Chris King and Brad Whipple -- two men who refuse to let this case die."

p. 203 Sherman also writes "...one cannot deny that he has had his share of success. King was responsible for uploading the Sarah E. arrest video onto YouTube and he also released many of the Liko-Kenney--McKay case documents on his Web site. He has been spurned by many so-called legitimate reporters, but Chris King has been a tenacious advocate for the Kenney family and a major thorn in the side of New Hampshire law enforcement."

The U.S. Department of Labor has a different view of my credibility and if you have any questions about that you can go find Attorney Corey Surett.

Find out w'happened when I lobbied for overtime pay for my trainees you foul-mouthed little pig:

And of course Proskaeur Rose has a different view as well, that's why they took Derrick Gillenwater's First Amendment case all the way to the Massachusetts High Court, prompting settlement of the underlying case.

Look it up, fool.

Well, now that likos dead there's not much crime here in the north country. Leaving me with my blackberry and some time to defend a local hero. It's a damn shame that he needs defending from a piece of trash like yourself. How's caleb doing on the pot farm. Oh I'm sorry the "coffee" Farm"?

Actually the crime and missing girl problem will cease because Floyd ("I killed 43 people") and McKay are out of commission.

Caleb is doing just fine, and I am not going to tell you where he is, you moron.

And there is no marijuana on Davey and Michele's farm, but I do have some rather nice coffee and bananas from there.

And oh, I'll take the DOL and Proskaeur & Rose opinion of my credibility over yours any damn day, as mentioned, and as you neglected to address.

PS: You got my memo yet?

Once again your wrong king idiot. Jackie mcglone is oconnells lawyer in the fasano case. You know the one you keep shooting your ugly
Mouth off about. You friggin moron. Your worse than a weatherman. Pack it in tool! Direct flight to Kabul. In memory N Cpl. Bruce Mckay. Please Drive courtous its the New Hampshire way. Remember, get another 1 way ticket for whipple.

Well then I really don't give a shit what he thinks, but thanks for the invite, I'll rise to the challenge to make sure that all of the salient facts about his client and Fasano and his girly are ALL EXPOSED.

And I know more about that case than you think I do, you stupid jackass.

You'll find out in due time and not a minute earlier, got that bucket boy?

I'll be parked right there at the courthouse with my goddamn camera just as I did last night with Judge Kagan.

And I was indeed right about Franconia and the vote on Bruce McKay Highway, so you can go pack it in and put it where the sun don't shine.

I got some nasty hate mail that had your name attached to it. You reportedly said:

"I hope that dipshit chris king stays the hell away from my case. (fasano). Credibility is ruined at the sight of his face".

I can assure you that I will be investigating and following this case, just as I did in the Dan Talbot Revere Police Murder Trial, this is my favorite post from that case, showing the spent casing placement on the Gatorade bottle.

I am a credentialed member of the press and a successful trial attorney who has sued and represented LE, so I look forward to following the case.

If he isn't then the chips will fall as they may and I really don't care because I don't have a horse in this race, although I am slightly predisposed against Fasano.

When the question prompted me to say how I heard about the firm, I wrote:

"A Jackass on the Internet."

So you see I am accurate, as always.

See we're free negroes now, the negroes in Franconia and me.

No mo' poll taxes, and Grandfather Clauses, we ain't be having dat no mo' massuh'.

-The HNIC (Highest Nature In Course)

Of course your predisposed against fasano. He was a public servant that got shot. That's how you roll. Backwards! In regards to the memo, headline states " for law enforcement/internal use only". Therefore there is no way I could turn this over to a suspended attorney. By the way you forgot the word "suspended" in your email to the real attorney. I'm willing to bet there are no mirrors in your mudhut. JACKASS

As far as the movie goes, I would go with rodney king. In short time you will see the irony.

Well in point of fact you stupid mouth breathing jackass, in the audio from my radio show I said that Joey Fasano was a hero the moment he donned his uniform, but that if he was a fallen hero he may need some help for his personal problems, duh.

I am predisposed against him because the authoritay and the major media you welcome so much reported that he had cocaine on his face, remember that you dumb bunny jackass?

Now if it turns out that O'Connell had cocaine on him, that will change the complexion of things.

But wait. You support the LE regardless of what they do wrong, that's how you roll.

PS: And if Jackie said that about me he can kiss my black ass, send him the message with a bottle of Voss water on me.

What, you and Marty Dunn gonna' trump up s'more criminal charges on me or plant some cocaine on me so you can beat me as you did Rodney King, I get it.

You haters have had several years to refine your game, but yet you slipped on the BBO tip.

And the Town of Franconia still says no to Bruce McKay Highway.

You can get Spencer Kagan to preside.

That would be perfect for you.