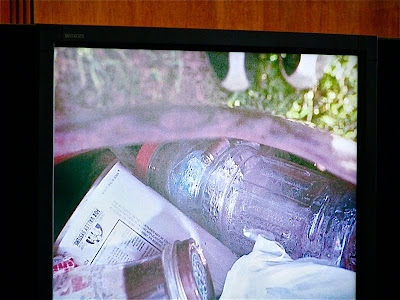 You could stand there and fire all day long and never have that happen, plus the bottle would have been burned, who do they think they are fooling?

They ain't foolin' me and that's why Conley can't stand me.

But I know Cengage Learning is pickin' up what I'm puttin' down. Heck, watch for Mythbusters and CSI to run with it next season, soon they'll be watching, too. They have writers who search the Internet for stuff like this, 'natch.

But over at MrMillcity some folks called me a "duplicitous cunt.... a sociopath (and) criminal who should be behind bars."

Nice. All this because I took the time to give you more trial exhibits and testimony than any major media source. So now we know not only do they hate the vigorous and legal application of the First Amendment by this black man, they're also misogynist. I've never lost a Government or Corporate challenge to this blog despite 7 or 8 efforts so keep on hatin' guys, it will reduce your life span measurably. Shows the "mentality" of the typical KingCast hater.

Posted by Christopher King at 9:33 AM

PS: Dear Attorney Conley, those credentials are coming later this week or top of next, I'm reaching for the plastic and the order form right now for New England Newspaper & Press Association, once they reviewed the facts they were more than happy to welcome me in.

I sincerely hope we can keep our future conversations professional, I'll do my part if you do yours.

I thought Krupp did a pretty good job on the trial but why would he have not brought this up...the hot casing not burning the gatorade bottle? Why did he not talk more about the 4 different bullets found in Talbot's gun after the incident. Did they look through his stuff in the truck to see if there was a different box of bullets than the standard Revere Police issue hollow points? How could the State Police ballistics guy not know where in the magazine the 4 different bullets were. Were they in the top or bottom of the magazine????And why was self defense taken off the table by the Judge during his Charge?? I can tell you the verdict may have been different had Racca's proffer statement been heard by the jury and had self defense been an option.

Very sage points. Meanwhile I'm dealing with the fact that none of my YouTube videos are showing, just sent an email off to blogger.

You may recall the testimony that RPD used to issue the hydra shock rounds to that downplayed the presence of them in Officer Talbot's gun, but yah I still smell a rat lurking here.

Also Michael Racca's testimony I believe should have been admitted under the Statement Against Penal Interest rubric, absolutely and I'm sure that will be argued on Appeal.

What would be interesting if is Jurors wrote the Court and told them that they would have voted differently if they had heard Racca's testimony (here it is on YouTube since you can't see it on my blog for the time being) or been instructed on self-defense.

PS: I did have a conversation with him about the placement of the casing, he indirectly went into it with a couple of witnesses.

I will not detail our conversation on that in this space but my impression of it is that he was limited in what the Court would allow him to argue about that.

Query, WTF do they want, Conley won't talk to me but he'll talk to reporters and newspapers who use my images, and he read my blog but tell me to go to hell to my face.

Speaking of tools wait until I post a pic of Press Secretary Jake Wark I'm waiting on, as he laughed at Conley disrespecting me as I shot the Dan Talbot Murder Trial video #35.

Also by the time Dan Conley pulled his little gangster move he was well aware of who I am, and that Masters in Criminal Justice had top-ranked my personal blog with the ACLU.

They were aware that I had praised the DA's on another murder case, and they were aware of KingCast.net, my main website portal, so Conley was just being a hater, pure and simple and I caught him on camera, as did an observer I spoke with yesterday who is trying to load the video and a picture of press secretary Jake Wark giggling like a little girl on to a CD to present to me.

I'd love to have a discussion with Krupp but as you know he probably is not allowed to talk to me. I think he got screwed a little with the info that was held from the jury and that manslaughter was not an option. Thanks for all the info on your site. It was great (or maybe not) to hear the stuff the jury was not allowed to hear. I still think Bobby did it but was it self defense???, now I'm not so sure. Keep up the fight!!
p.s.

"We did not know the children were inappropriately interviewed," writes the juror -- nor did he or the rest of the jurors know how authorities and parents influenced that testimony.

"If I knew then, what I know now from reading the newspaper, I would not have convicted Mr. Amirault," he adds. The juror's letter concludes with a final plea to "release Mr. Amirault and undo a terrible wrong."

Here's more from the Wall Street Jounal and Dorothy Rabinowitz.

In 2000, the Massachusetts Governor's Board of Pardons and Paroles met to consider a commutation of Gerald's sentence. After nine months of investigation, the board, reputed to be the toughest in the country, voted 5-0, with one abstention, to commute his sentence. Still more newsworthy was an added statement, signed by a majority of the board, which pointed to the lack of evidence against the Amiraults, and the "extraordinary if not bizarre allegations" on which they had been convicted.

Gosh knows that there were lots of potential and actual holes in portions of the State's case. I mean, you gotta' ask yourself, why else would DA Conley be so nasty to me?

It's because I dared to show what mass media won't, in greater detail with accurate legal analysis seldom if ever seen from the others.

And despite what all the haters have to say about me, they can't knock the accuracy of my reporting or the attendant legal commentary.

The issues are the issues. It's just that the State wants it to appear a bit less ugly than it really is, whether one agrees with the verdict or not.

Which kinda' begs the question:

"Does the End justify the means?"

And now you see why the Columbus Bar Association hated me too, disdainfully writing "King is a philosophical orator."

I have waited for years for the Internet and technology to catch up to my desire to show the World Public what really goes on in a Courtroom, and I'm just getting started.

DA Conley's office reading with rapt interest (even though he won't speak to me in public, in private he LOVES MY BLOGS!)