A KingCast sobering thought: What if Dan Talbot was killed by friendly fire? 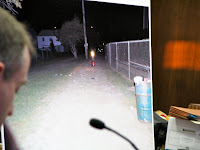 Without some type of medical/forensic testimony as to bullet fragment and approach angle, I gotta say it's entirely possible that Officer Talbot was felled by friendly fire. Look at that long narrow chute in the baseball field photograph that Officer Soto -- the worst marksman who did not pass his exam -- had to shoot through as he took cover behind the blue trash barrel.

Officer Talbot was found on the grassline/walkway.

What if Talbot had turned to his left to check up on his posse and caught it from that direction, it certainly is possible. That bullet hole in Officer Soto's pickup truck, parked at the end of the chute where the headlights appear, was probably from Soto and it was on the left corner of the truck, on the bumpah'.

Look at the relationship/proximity of where the pickup was to where the grassline/walkway is. I shoot guns sometimes (well, not when I'm drunk I don't) and I can tell you that ain't a whole lotta' wiggle room, especially if you're plastered.

Point being that without further evidence that is one plausible explanation. The State had better step up the game if it hopes to gain a conviction.

I'm serious as a heart attack.

PS: Don't get salty with me, I'm only stating the obvious.

UPDATE: On 22 Jan The State called in Statey Brian J. Canavin to testify about class and individual microscopic traits that the state contends conclusively show that the two 9MM casings found furthest away from the bleachers were in fact from the Hi-Point model that was reassembled from the sewer. He identified reamer chatter, and the unique handmade nature of a Hi-Point that yields certain definitive characteristics of a Hi-Point 9MM including 9 lands and grooves with a left twist in the barrel and he claimed the bullet fragment (almost but not quite visible in Prosecutor Zabin's outstretched gloved hand to the jury) was reflective of such a barrel.

I will be uploading video where he notes that he was unable to reach any degree of certainty regarding the individual characteristics of the bullet fragment that caused the fatal wound to Officer Talbot. He could only say that the size/weight/mass were consistent with ammunition that could be fired from the Hi-Point. Also, he could not establish the approach angle of the bullet hole in Officer Soto's bumpah' (see the blue rod) because of too many variables including the flat tire, possible deflection of the projectile on entry, etc. etc. so they can't tell if Officer Talbot or Soto fired that .40 cal round.

He was a solid and quite likable witness and I told the State that at the close of testimony. Now it is up to Attorney Krupp to refute that science when testimony resumes on Monday. At this point it appears that the State is almost 1/3 of the way home:


The fatal bullet might be linked to the Hi-Point. Assuming arguendo that the Jury buys that, there is the rest of the journey: Second, the Hi-Point has to be in Robert Iacoviello's hands and third, he must possess the specific more accurately, requisite intent to commit murder. That's going to be quite the Journey; to prepare for the ride I'll pack lots of sushi in a cooler with some of grandma's pimento sandwiches! 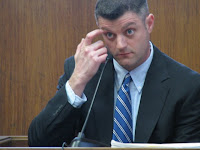 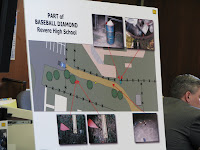 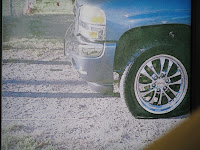 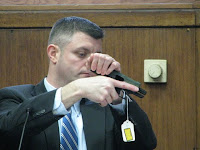 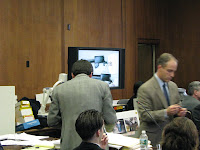 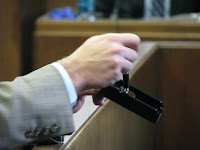 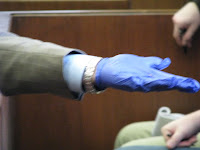 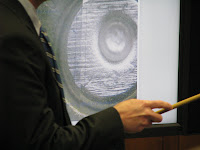 Posted by Christopher King at 3:57 AM

Such absolute bullshit. Clearly biased for the defense. Speculation based on no evidence at all. Lies.

You're a complete jackass.

I put forth both sides of this issue in this post, and put forth the testimony of the State's witness who addressed the matter, what you didn't see that or what?

You're just used to major media and the pro-cop bias, but I truly give both sides to the issue and you just don't like it, that's why you have absolutely nothing of substance to say here, just showing up and wasting bandwith and time.

When you have something substantive to say about where I have allegedly lied, I will listen.