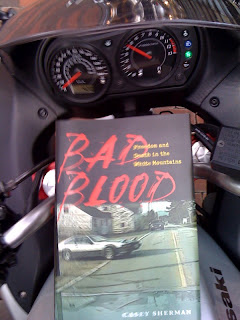 I write on my own and on behalf of hundreds, if not thousands of North Country (and other NH residents) who have twice spoken on this matter, first when State Rep. Martha McLeod sneaked HB 1428 past everyone without even notifying her peers on the Franconia Recovery and Reconciliation Committee. She was in fact working in it for months and never told anybody, read the documents right here. That's why she lost her Senate Bid.

We again spoke out at last year's hearing on SB 154 when Senator Letourneau kept trying to talk me down, and to keep me from raising legitimate points of interest even though he allowed other LE to extol Bruce McKay's virtues. Listen to the YouTube video exchange between Senator Letourneau and me:

Look: I am a former Law Enforcement Attorney myself and I don't hate Bruce McKay but I do hate the kinds of things that he did, including threatening firefighters, the knife to Ms. B's privates that Chief Montminy ignored (and even the day he died, violating 7 OC Spray and pursuit policies) and that is why the North Country has spoken and that is why the House previously agreed, and nothing --- I repeat nothing -- has changed. He's got a bad legacy.

Again, the direction was "Wait until the Community wants it."

"The committee unanimously supports that when the local communities feel that the time is right, an appropriate section of state highway should be dedicated to the fallen police officer, Corporal Bruce McKay. Vote 15-0."


I'll note that potty-mouthed Bill Christy -- one of the staunch supports of this bill, after being duly informed of the facts by major media and by me, did indeed write:

"Based on the information that is public about this whole situation and its history, had it been me who had gone through the same experience, I would have shot McKay as well. I don't say that lightly...."


Please table this bill as its progression smacks of outright hegemony, unless you don't care about the will of the people in North Country. Now that I discovered this matter and have spoken with people in North Country, expect to receive many more emails between now and Wednesday's vote. More information and video at Casey Sherman's book launch for "Bad Blood: Freedom and Death in the White Mountains."

You're trying to get your points across and so am I.

"Thanks for the link..enjoyed listening to the audio clip as well. I don't know how that town could ever heal with a strip of highway named for McKay. Would be a constant reminder of all the wrong that happened that day. I am glad to hear McKay has been memorialized as a fallen officer in Washington DC as I'm sure he had done some good things in ... See Morehis career. As for the Kenney family, I am sure they are very happy to have you on their side. =) I only hope that Greg Floyd has to answer one day to his part in Liko's murder."

A: "Time has made things different... the town leaders are in support."

Well nothing is different about that, the town leaders have always supported it but the people of the community were not aware of this pending event, I told her that because Caleb's mother didn't know until Friday and she emailed me.

The Senator then spoke of the general tradition of honoring LE and I said I heartily agree with the general but sometimes the specific outweighs the general.

The Senator urged me not to pursue this with the townspeople when it comes to the Senate because of all of the hurt that will come about. I then told her to consider her actions in the same light as the Root Cause of this next round of hurt.

The Senator didn't see the knife to Ms. B's privates as relevant (in addition to the fact that he was violating 7 OC Spray and Pursuit policies when he died) and I said it is relevant because it is part of his legacy and you are attempting to honor that legacy.

The Senator told me that she thought she was older than my mother (I doubt that) and asked me whether the Internal Affairs investigation found that he violated those policies.

"What Internal Affairs investigation... there was none, yet again" I told her.

I told her that we would have a package ready for the House when the Senate passes this, as the Senator flat out told me:

"This bill is going to pass."

On that age issue, I called Senator Gilmour, I was right.

If the Senate of NH does not take the testimony of Brad Whipple it will be making law completely uninformed. When considering naming highways consider how Maura Murray got to NH on 3 cilinders. Consider how Patric McCathy carried himself to his death. Renaming the highway is al dente. Let the Senate Hearings commence!

Seems to me that the pols are more concerned with representing New Hampshire as a state where out-of-control, redneck, law enforcement are properly supervised/disciplined. the tourist-based economy up north would be greatly affected otherwise, not to mention the lawsuits would possibly BANKRUPT the smaller towns these bozos operate out of.

Thank you for contacting me about SB-154 which names a road in Franconia after Corporal Bruce McKay. I supported the bill when it passed the Senate today.

Please feel free to contact me on any other issue.

Dear Senators: Please follow Jeb Bradley's example and tell us how you voted on SB154

Thank you in advance for your cooperation on this matter, given that it was a voice vote today.

The residents of North Country would like to know where each Senator sits on this matter.

Just so you get your journalistic facts straight before you report a story check next time. I had NOTHING to do with the bill that went before the Senate today in NH. The petition I am "leading" is a national one that will go before the US House and Senate, if NH does not vote their own bill in. It would be to name a section of an Intersate highway in Cpl Bruce McKay's honor.

Cpl. Mckay deserves and will get his highway.

No he doesn't and hopefully he won't.