KingCast asks why did the Court refuse production of the Revere video to Daily Item; I won the right to review the Franconia Bruce McKay dash cam. 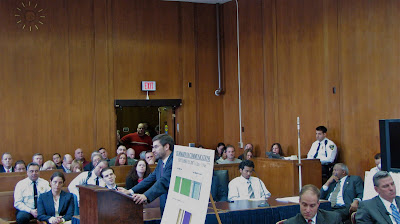 Note: The KingCast YouTube video is a recorded phone call with DA media Director Jake Wark. He is a pleasure to work with.
Judge rules against Daily Item in Talbot murder tape case
LYNN - A Suffolk Superior Court Judge has ruled against The Daily Item in its attempt to force Suffolk County District Attorney Daniel Conley to release a public surveillance video taken the night that Revere Police Officer Daniel Talbot was shot and...
3.8K - Apr. 2, 2008; scored 618.0

But here's what happened when I sued for the actual Bruce McKay VHS tape, which will undergo further analysis as noted at the Casey Sherman "Bad Blood: Freedom and Death in the White Mountains" book launch post. What happened was, I won. Just the facts, please.

Regarding the video of the 5/11 dash cam:

"[KingCast] may copy the original video under supervision of custodial police authority."

And the AG's office got dinged for failing to provide protocol regarding homicide investigations:

"The Court has reviewed the cases and affidavits on which the Attorney General's office relied in originally denying the Petitioner access to its protocols for investigation of a homicide and finds that such withholding was not justified."

There is almost always a coverup and no discipline when LE shoot each other, take a look at the crazy case in Concord, NH where a cop shot another cop at a closed credit union, and they didn't even get cited for trespass, nothing. Idiot AG and current U.S. Senate hopeful Kelly Ayotte says "It's All Good!"

And here is an additional concern, this will be interesting because by his comments in this blog and at the Revere blog, some hater-head seems to think that I did something wrong the other day in Court. I did not, so I'll put that hater-head right back in his place. Here's The Deal Mr. Hater-Head, pull up a chair so I can take you back to school:

But the bigger question is why did Conley (and Ayotte) fight the production of public records?

I don't like that ruling at all and frankly it should have been appealed.

But then what do I know, he-heh.

PS: Now what was really interesting is that the Court found a way not to award court costs even though I substantially prevailed on the key issues of the case.

It was a protectionist ruling, can't have a lil' privateer like me making Kelly Ayotte write me a check, No Sir.

I see strange things in Court all the time, and I report on them right here and over at KingCast.net

I read up on it. The DA's Office invoked a Statutory Privacy Exemption because of the pending Grand Jury Investigation.

But the Office invoked it well after time allotted by Rule.

So in any event, I'm going to ask the Prosecutor's Office for a copy of it now that that Grand Jury investigation has been long completed.

And I will eventually sue over it if necessary, given the expiration of the basis for the stated defense. Of course the Daily Item's counsel said he was going to post the video as soon as the Grand Jury was out, but I've yet to see it so I wonder what kind of roadblocks he has encountered, I'll give him a holler on Monday and keep on moving toward full and complete transparency in Government.

Our tax dollars paid for that video and by golly we are entitled to see it. There's no threat to national security here, just a bunch of folks with and without badges (and definitely without uniforms) acting badly.

The Editor: Always working for the First Amendment.

As to the proposed modifications:

I think one workable solution would be for two fixed video cameras (one mainstream and one blogger) and no more than one still photographer shooting at a time.

The other photographer and I made it a point that we would not be shooting at the same time, so I don't see what difference it makes if there are 2 photographers (one mainstream and one blogger) at a time if they don't shoot at the same time it avoids the "free-for-all" that Judges are rightfully concerned about.

If anybody else has any worthwhile suggestions beyond infantile wise-ass remarks I'm all ears, you post them and I will display them.

if the court room is a public forum, then why not show the trial live on public access television.i remember watching local trials in boston on the tv channel court tv.also watched the menendes and oj simpson trials. on a side note thanks for keeping me up to date on the dan talbot murder trial.i have personal interest in the outcome. the whole thing was fishhy from the beginning.i'm sorry a person is dead, but prosecute the correct person.not a patsy.dan talbot was killed by friendly fire or one of the kids who got immunity...

I was friends with Danny for over 10 years.. You have no idea what kind of person he was.
I would love to talk to you and tell you more about him. I know its hard to understand why
Revere Police officers would ever go and have a few beers behind the high school.

I've watched all the videos you have posted, and it does seem strange how everyone there
that night has their own recollections of what happened.. NEVERMIND WHAT THAT ASSHOLE FRANKLIN DID... I hope to speak with you someday.

Danny was a great kid who made a bad decision to get involved with some of these people. Thanks for taking a minute to read this.

Yah, I know. There shouldn't be any need for video because the attorneys and gallery should all be shown on public access or courtroom TV or whatever.

Then individual photographers could come and capture some stills, no biggie.

After witnessing some of the things I went through as a Civil Rights Attorney I decided that a major life cause for me would be to make the courtrooms more accessible to the public. I am ecstatic that technology is allowing me to do just that.

This case is only the beginning.

I never declare my guess as to the ultimate verdict in a case not my own except once on that Michael Isreal case -- I put those old VHS vids up last week -- I know we had really kicked the State's ass, and sure enough that all-white Jury came back in like, 1:40 I think it was and said "HELL NO NOT GUILTY!"

I will say in this case that the State helped to create an aura of substantial doubt by its own actions, and no matter what fathead schmoe writes in to me to complain about, you cannot excuse the actions of the State that put their own case in substantial peril, whether it be G, NG or Hung.