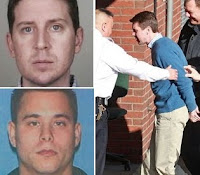 Booking photo by Nancy Lane.Take a look to learn about the findings on the Mission Hill fired truck tragedy, the Revere Daniel Talbot murder developments and the new case involving a purported road rage shooting in Quincy between Marina Bay developer Ronald O'Connell and area Firefighter Joseph Fasano, who had cocaine in his car. Interestingly:

Fasano was on probation for 14 months and ordered to attend Alcoholics Anonymous meetings until May 2008 following a fight he had with his former girlfriend at his Weymouth apartment in March 2007. Police reported that Fasano flashed his firefighter's badge and later threatened to kill one of the officers who arrived to break up the fight. He was sentenced to probation for domestic assault and battery, threatening to commit a crime and disorderly conduct.

Issues of bloodwork predominate the latter two cases, the first case is more like criminal negligence.

Newsflash: The Patriot Ledger confirms that it's okay to have a little recreational cocaine if you're the white son of a firefighter and a jake:

Police confirmed Wednesday that a small amount of cocaine "consistent with personal use" was found inside the Jeep that Fasano was driving Saturday night. No charges have been filed in connection with the drugs.

So is that how it is? White Daddy was a jake: Check. History of domestic violence: Check. History of substance abuse: Check. Cocaine in car, no prosecution: Check. As I sked on the radio show today, what kind of message is that sending our Youth or anyone else for that matter? While the Quincy Police Chief seemed otherwise quite professional at the press conference, this non-prosecution is myopic, elitist and quite foul, actually.

Related link: Local 718's firefightthesmears blog and Chris King's "9/11 and the Negative Space."
Posted by Christopher King at 10:33 AM

I know, I know some of you are going to say "why is it all about the fact that he's white?"

Well I'm sorry but he is, and so was his father, hell I didn't make them that way.

If the day should come to pass when black folks and other minorities start getting away with a history of substance abuse and domestic violence and cocaine in the car, that would be No Great Reward either.

That having been said I hope Mr. Fasano makes a solid recovery.

I also hope we get to the bottom of this, and something is telling me that there is a tie-in with the club that O'Connell owns, but that is pure conjecture at this point so we will wait and see.

Just as we did in Revere, where we are still waiting.... and not seeing much.