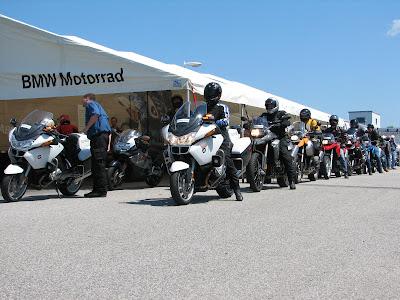 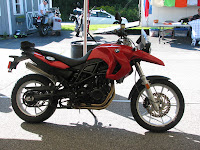 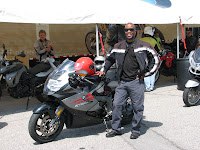 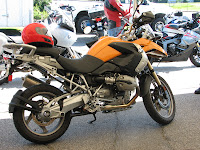 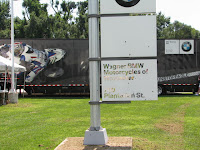 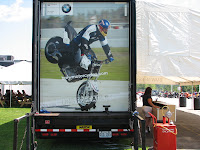 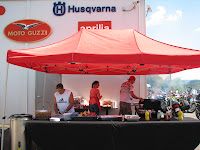 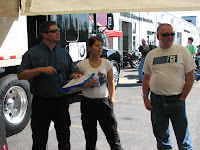 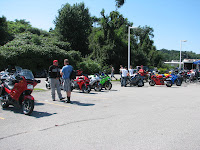 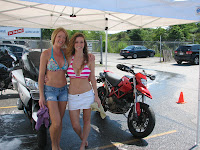 The rankings:
BMW F650GS Twin -- 71hp 55 ft/lbs torque. This is one great-looking machine. It is a detuned version of the F800S/T engine that I came to ride, you can see one of those in this post. Great bike, nice sophisticated sounds, great suspension - compliant but firm enough so you can get down. Low on power compared to my 650R, even though the horsepower rating is exactly the same and the BMW's torque rating is a bit higher, the Kawi would smoke this bike. Why is the brake reservoir on a flex-mount so it vibrates somewhat annoyingly? Kinda cool kinda not. Third place.

BMW K1300 S -- 175hp 103 ft/lbs torque. This was my second ride. This bike is thoroughly awesome in every way except for a bit of buzziness at various rpms. I set the Electronic Suspension Adjustment (ESA) to "Normal" as "Sport" should be reserved for track use IMO. Odd seat, it is double-joined and takes some getting used to. Yes, it is fast as hell, but just flat capable and composed and amazingly light on its feet. You have no idea you are on top of 500 lbs. of motorcycle. But as good as it is, I was surprised that I think I like another bike a bit more for when I have enough loot to buy one of these fine machines.

BMW R1200 GS -- 105hp 85 ft/lbs torque. The winner IMO. This is the "Do it all" BMW. It's about big as a house, but don't let that fool you. It is totally flickable and holds the corners well at anything less than hooligan pace. You have to get past the feeling that you are falling into the turn because it's so tall, but just set the ESA to "Sport" and it just flat rocks. Easy wheelies (not that I intended to pull any he-heh) but it throttle wheelies at the top of the powerband so easily and if you snap throttle in second it's coming right up, yah. The vibrations are soothing, and it's a just flat charming motorcycle. There is a reason it is BMW's top seller Worldwide.

Sponsored by BMW Motorrad, this is a Nationwide series of planned events where folks can get an opportunity to enjoy the greatness of modern BMW motorcycles in a controlled, safe and enjoyable environment. Those of you who know me know I took care of Davey Kenney's vintage R100S for a year and that's a great old bike, but these bikes are perhaps even more incredible than that bike was in its Day. Watch it tick over, loose valves and all, after 5 months of cold storage right here. I miss that bike.

Our capable tour guides Sara Life and Brad Henson let the bikes breathe as much as could reasonably be expected, and in the case of the K1300 S I took for my second ride, those breaths come up quickly. Let's just say the acceleration of that 175 hp machine is best described as "brisk."

Thanks to General Manager Mark Reynolds. On Kim -- who helped her buddy Devin wash bikes -- I couldn't make any excuse to get mine washed 'cos I keep it close to spotless, so I just took the damn picture anyway :)

For more about BMWs new and old simply run a word search in the top corner for "BMW" or "BMW spoken here."
My BMW cars: Mr. Handsome, Greta + all the rest.

Meanwhile, earlier that day I got my race face on while I prepped the vicious BMW 245 for track duty, and later that day my little Kawasaki 650R was one half of a pair of fighting Ninjas, protecting the walkway to the Mac Store in Boston's Back Bay, on the way to an evening of Shakespeare in the Park :) 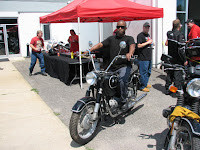 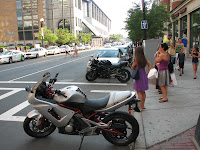 Posted by Christopher King at 10:03 AM

And why no rolling video?

Chris, I need your assistance w/ an abuse of power in NH LE. Let me know where to email you please.