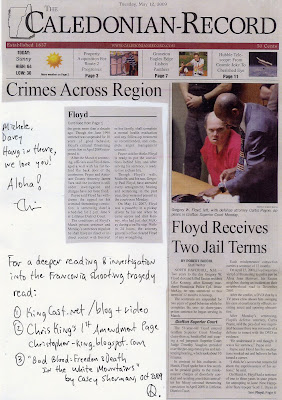 Despite representations (and a hug) from Vice President Biden it has been ten (10) months now since we first met, and I am still waiting for any response from the U.S. Attorney's office regarding Gregory W. Floyd's repeated violations of 18 U.S.C. 922(g)(1), the most recent of which occurred last year -- within the Statute of Limitations.

As you know, the Grafton County Superior Court Docket Sheet on Case No. 98-S-242 clearly reflects that the U.S. Attorney's office failed to respond to the same inquiry made ten (10) years ago. And you told me nine (9) months ago that the office of the NH Alcohol, Tobacco and Firearms would contact me shortly. They have not.

As such, and now that we see former NH AG and U.S. Senate hopeful Kelly Ayotte's "hero" Gregory Floyd properly incarcerated for yet another distinct set of gun violations and bad behavior, it occurred to me that A.J. Boisvert might not have been subject to Gregory Floyd's criminal threats (fact: he was convicted) if your office had taken some action ten (10) years ago. Also, Liko Peter Kenney might still be alive instead of being murdered (well-reasoned opinion based on the windshield bullet that Kelly Ayotte willfully ignored). But Kelly Ayotte cleared him in less than 24 hours and lied to another former AAG, Harold Burbank, Esq. Read about Kelly Ayotte's lies to another AAG here. This despite the fact that she knew all about Gregory Floyd's record of dishonesty and multiple felon background.

If this is the sort of responsive government championed by President Obama and Vice President Biden, I'll pass. The taxpayers of this Fine Country deserve more. I eagerly anticipate the publication of Casey Sherman's book, "Bad Blood: Freedom and Death in the White Mountains." While Mr. Sherman and I only crossed paths twice in our respective investigations, I get the feeling that he is going to be mentioning a lot of the same issues. Also, a Federal Complaint will be issued to put various Senators on Actual Notice to Kelly Ayotte's Deviations from Protocol in the Franconia shooting tragedy "investigation." Perhaps that will elicit a response from our responsive government, but I'll not hold my breath.

Yah, I hand delivered this post to Attorney Chabra and other places in the Federal Building today.

Just doing my job as a citizen :)

Just look at what a THOROUGH investigation uncovered in the Michael Jackson death.

It's all coming down the line, just takes time.

Remember the Michael Isreal case took 4 years and 127 steps to Justice before we settled with Officers Rhodes and Hensley for $58,500 and got them found liable for making Mr. Isreal a victim of violent crime.

We're only at 2 years and counting here.

Plenty of time before the Statute of Limitations expires, ahem you haters better recognize.