KingCast tells Emmi: This is a Man's World... but it wouldn't mean nothin'.... without a bicycle :) 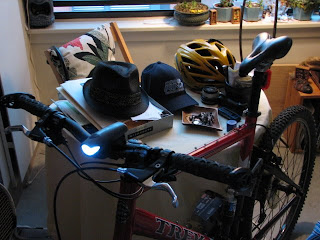 Hey Emmi, great news on your NPR Boston piece today, thanks for sharing that on your blog.

For those of you who don't know, Emmi is an image consultant (It's a Man's World) who is featured at 1pm today probably on WBUR for "being brave," because she learned how to ride a bicycle as an adult, no easy task. Nice. I, of course, have a nice new bike to ride as well. Nice. Bike is Good. I kind of like bicycle more than motorbike, even. See "BMW is spoken here."

It was honestly the scariest thing I’ve done in a long, long time. Think about this - layered on top of the normal butterflies that come with being interviewed, I had the bonus of having to stay upright on a bike that clearly wished me dead. It was my goal to ride gracefully while dodging the entire population of downtown Boston and also to sound witty, remember not to swear, all while wearing the bikerophone. I found out the bikerophone which turns out to be a fancy term for helmet that was designed for someone with a Charlie Brown sized head, had a tendency to slide over my eyes and obliterate my field of vision. At one point during our ride I had to make the decision between sacrificing myself or an off-leash poodle. I am happy to report that the poodle remained unharmed and I managed to land on my feet although the bike did go flying. (For those keeping score Bike 36, Emmi 1) Now I can rest comfortably knowing that NPR has audio of me muttering things like “don’t hit the people Emmi, don’t hit the people.”

Posted by Christopher King at 6:50 AM