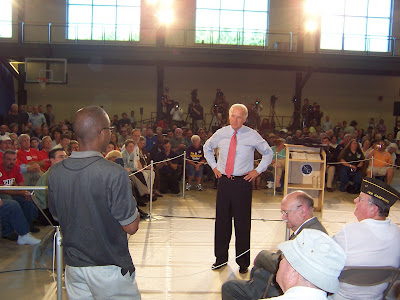 It was great to meet Senator Biden Wednesday and to hear his earnest concern for application of existing gun laws like 18 U.S.C. 922(g)(1) relative to people like Gregory W. Floyd as he shook my hand and gave me a hug on the matter, in solidarity. As you roll up in here to New Hampshire this weekend be safe, and watch out for bad Law Enforcement Officers that Republican AG Kelly Ayotte is certain to protect.

Drunk: No discipline for Hooksett's Benjamin Beauchemin, who flipped his SUV and fled the scene, kind of like that Revere, Mass LE tool Michael Ervin who was fired.

In addition to temporarily leaving the scene of the accident, Beauchemin also claimed to his arresting officer that he chugged four beers at his girlfriend's house nearby after the crash to calm his nerves.

Abusive: Sordid history of Bruce McKay and his real legacy, leading up to his assault on Liko Kenney and Caleb Macaulay, violating at least eight(8) pursuit and OC Spray policies.

Murdering: Richard Dow, 99% sure he murdered his family.

Trigger-happy: Michael Fateaux, but don't take my word for it. Check the Motion to Dismiss filed by his counsel at precisely 9:30 a.m., 18 March 2005.

13. The state did not perform any trajectory analysis of the shots taken by officer Fateaux. Such tests are clearly relevant to the defense and its ability to effectively confront the officer about the accuracy of his report.

Then of course there is the report from Paul Kish forensics:

The general location of the shooter relative to the side of the van could have been established by extending the trajectory of the projectile which struck the passenger side headrest back out of the driver's side window. This headrest was cut from the vehicle..... [The trajectory rods in the state's photographs to the steering wheel were not fully analysed and could have established the orientation of the front wheels and direction of the vehicle] The portion of the steering wheel containing these bullet impact marks was actually cut from the van..... Apparently a projectile penetrated the front passenger door panel and dented the outer door skin. The door panel was disassembled, but there is no indication of the trajectory of the projectile into the door."

Please promise to consider these issues with all the earnestness at your command.

Suddenly I feel more comfortable in predicting a review by the U.S. House.

All things in due time.

Be warned chrissy, when you start stalking presidential candidates the Secret Service will pay you a visit.

You should worry less about Ayotte and start worrying about something a little closer to home. You might want to tighten up your Franconia Collective lest they all wind up in jail.


NOW THIS IS FUNNY!! No wonder these ideao post as Anonymous. Forget not having guts to speak up to leaders but not even have the guts to have their comments and opinions tracked here.

Chris - were you hanging out w/Floyd at this event? Kind of looks like him sitting to the right of you ;-)

To borrow from a quote from the "father" of modern policing, "The police are the public and the public are the police..."

To the cop bashers on this incident, sorry to rain on your parade, but law enforcement conducted themselves in a professional manner in this incident. They accident was investigated and the the operator was charged. That is what the police do, investigate and forward their findings for action. The police do not sit, judge nor sentence. That is what the judicial branch is tasked with. The judicial process was followed and the case was prosecuted and reviewed to the standard of law. We, as the public, do not always like the verdicts handed down, but by far, our system of governnment and justice is still the best in the free world.

The verdict rendered would have been the same had it been a civilian or anyone else. Police, like many other government figures, are held to a higher standard, but in the eyes of the law, all are equal as lady justice is blind. This incident would have never received media attention had it not been for the "job" held by accused in this matter. Again though, that is because law enforcement officers are held to a higher standard than most, and that extends to their off duty and personal lives also.

So, for those who think that being a police officer is "just a job", well, I will disagree with you. Being a police officer is a lifestyle, because you are constantly "on duty", always expected to be available and certainly always scrutinized in a much brighter and harsher light by the public than others are. Yes, we are held to a higher standard and when you accept the badge you accept that responsibility.

So, back to who polices the police. We, law enforcement do, holding ourselves to a higher standard; you, the public do, making sure that we conduct ourselves in the manner that is appropriate, and when someone falls short of those standards, then together we should be shining that light and scrutinizing the circumstances. So, while we can hold our public officials to a higher standard as a matter of business, we must judge them in the court of law with the same rights, privileges and standards for all.

As a final note, many have posted that if you think this is an unusual verdict, it is not and if you ever have the opportunity to sit in on a DWI trial, to do so. I would further add, sit in on any trial. Witness firsthand the challenges and hurdles and the burden of proof that the prosecutors have to meet to obtain a conviction. We, as officers, often share the same frustrations as many have posted here. We too often see criminal defendants set free or given what we believe is too lenient a sentence for crimes such as sexual assault, homicide, narcotics trafficking etc. Where is the outrage from the public then? Where are the vocal protaganist then?

From Sir Robert Peele, father of policing, "the police are the public and the public are the police; the police being the only members of the public who are paid to give full-time attention to duties which are incumbent on every citizen in the interests of community welfare and existence."

So, to the public, I would encourage one and all to remain vigilant and "police the police", and all other authorities in government. But do it in a constructive manner weighed unbiasly on the scales of lady justice.
-
Bruce Mathews, NHSP Retired

The police destroyed all of the relevant evidence and failed to conduct any trajectory studies, same in Liko Kenney's case. In Liko's case the state violated accepted and reasonable protocol on at least a dozen critical occasions.

Chris Peach -- an investigating officer on Paulhus -- is a friend of mine and I was cool with his former boss, Lieutenant Tim Goulden, Nashua's lead prosecutor. The three of us were on a KingCast movie that ran for two years on KingCast.net and we always would laugh about it and how ridiculous Jaffrey and Chief Dunn (and by extention the AG's office) was in coming after me.

I am not a "cop basher," I am a vigorous proponent of the Truth.

And the Truth is, the actions of NH LE have been arguably criminal in nature and any objective person can see this.

The "Chrissy Chick" stalker sounds like a real freak on her posts. Trying to sound all "stable" but not pulling it off at all. Somethings wrong with that there babe. Seriously. She needs to get a life of her own or check herself in someplace for help.

Forget to say they also "lost" video that they claimed existed from the crime scene, which they are mandated to take, per policy. I have a copy of said policy.

And of course the Court found that they violated Miranda. I have the full Order which is even worse than this conclusion:

"Ruling in the criminal case, Hillsborough County Superior Court Judge Bernard Hampsey found that police violated Paulhus' rights by questioning him without reading him his Miranda rights while he was in pain from having been shot and despite his desire to consult a lawyer; and by posing as investigators for the state attorney general's office."

The attorney general's office investigated but never issued a report on the incident.”

But I guess that's all permissible as far as you're concerned.

I mean, what's next would it have been okay if they just shot him in the interrogation room and cleaned up the walls and called it suicide?