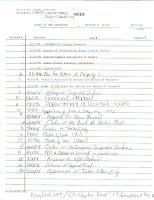 Sitting here on a North Country porch yesterday it struck me: The Gregory W. Floyd docket sheet/Index on 98-S-242 is particularly puzzling and it goes like this:

Neither of them had any information. All we do know is that the Floyds continued to own and possess weapons even though their application for return of property clearly stated that they would NOT have any guns within 100 miles of their compound.

And Sgt. Bret Beausoleil years ago issued this report stating that he is concerned about the situation as the neighbors are worried and scared of Floyd, as noted in this post.

Which is precisely why some of Floyd's neighbors have signed our Petition to have his compound searched and to have him indicted under 18 U.S.C. 922(g)(1) for -- at a minimum -- the gun he just turned in this summer, which is probably a [blankety-blank I'm waiting to see what the State says it is but I know what it should be].

Joe Biden, will you help us? You promised me you would. But then again a former State AAG who is now a Federal AAG also vowed to me months ago that he would prosecute Floyd. And before that, ten (10) years ago, the Feds represented that they would issue some kind of report on Floyd but they apparently did nothing. Why not? Is that typical for the Feds? I think not. The question then, is "who gets away with that?"

We are taxpayers and we need to know: Are the Feds coddling Floyd because he knows something? Because if not, there is absolutely no lawful reason for the government to sit by when there is a direct prosecution available against Floyd right now. Posted by Christopher King at 7:47 AM