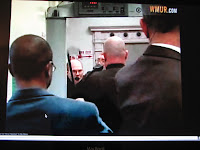 My sources indicate that the Caledonian Record has Gregory P. Floyd allegedly busted stealing $350.00 from his job at Wal Mart last week; he's 19.

This means that if Floyd kept officers away from him because he was allegedly under age and could not be interviewed on 11 May 2007 Floyd was lying.

That's called obstruction of Justice, so I'll be looking into that to see if the prosecutor or Attorney Ayotte will bring charges because you know, given the math he was 18 at the time, right.

See as I noted in this post with respect to my father being the "human backboard" on the court, the apple never falls far from the tree 'cos Gregory W. (stands for "whatcha' talkin' 'bout Willis) Floyd done stole him a marble statue of the Virgin Mary when he was about Junior's age, which did then make him a felon. Wait for it.... one and.... two.

Did Daddy tell Junior to boost all the money he could to pay high-dollar attorney Bill Christie, from Shaheen & Gordon. They know they got themselves a stinker on their hands now, huh?

Related post: The Franconia shooting tragedy is all about fathers and sons.

My sources also indicate that this mean feat was memorialized on video.

Kelly picked her heroes and now she can help prosecute them.

On page 829 of the report, Gregory Floyd says this when referring to his son's age: "uh just turned eighteen I think".

I'll check it out but that doesn't have him shielding Junior from the investigation though, so at this point until I see that I'm not about to start drafting a citizen's complaint for Obstruction charges.

I can't search for it right now because I'm too flat out on some other work stuff (you know, 'cos I got two jobs and whatnot, contrary to what some folks at the courthouse think :)

In his report in the big investigative file, I don't have the page# handy, Trooper Hamilton says that Floyd Sr. told him that Floyd Jr. was a minor and couldn't be interviewed alone.

Seems like by the time they interviewed Floyd Sr. many hours later, they had figured out that Floyd Jr. was actually 18. Since Floyd Jr. was already 19 when the Boisvert incident happened, "just turned" must have meant "many months ago".

Awesome. Can someone find the page number and/or JPEG and send it to me?

I'll move for Obstruction of Justice charges, especially in light of his other lies.

Now I have more to add to my fun pak for the Prosecutor in Floyd's Criminal Threats case.

It's deceitful conduct during an investigation and I'm going straight to Kelly to get her to seek Indictment or Charges for Obstruction of Justice.

And everything she does and every word she says will be posted right here.

If you can not get the dad, fry the 18 year old! Do it! He clearly is no innocent. Yes, feed on him, destroy his spirit, that is what Liko would want.

of course that last comment was a social critique and in no way meant anythng else. The words are from the Lord of the Flies, and are a comment on the instinct to attack the weak, which is what McKay apparently did. This kid needs some help. Cut him some slack, we were all stupid and 18 once.Don't become heartless.

Here's what I say:

1. It's one thing to try to steal some shit when your Old Man's not facing criminal charges in the most visible case in recent NH History.

2. The bigger issue is the Obstruction of Justice issue, and you better believe I'll be following up on that with Kelly.