Hey KingCast are you comparing NH AG Kelly Ayotte and Franconia Defendants of a Thin Blue Line conspiracy, like the Dow Murders? 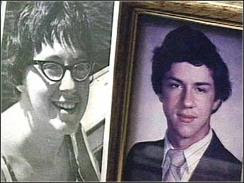 Twenty-five years ago to the day two innocent people were murdered, most likely by a rogue cop in Grafton, County NH and it was all covered up. So in a word, yes. And that cop was the adoptive father and husband of the victims, Richard Dow. Read the 2001 CBS News story. Read this Thin Blue Line post about Kelly, then this "missing document" post from Franconia as you begin to read about the Dow murders -- in which our friendly folks at Troop F conspired to cover up a cop's murder of his wife and son. They did this with tacit approval from the NH AG's office. Now then, if they will go to those lengths to cover murders, covering for Bruce McKay's alleged wife abuse and Gregory W. Floyd's checkered past and murder of Liko Kenney (a "dirtbag" according to Sgt. Wentworth) is small 'taters.

Here's The Dow Murders website. Do NOT skip the Intro.

In spite of the harassment and obstructive acts Detective Mozrall pushed forward and ended up solving the case. His investigation demonstrated that Jan and Steven Dow were murder victims, the car accident was staged, the fire set, and the perpetrator Officer Richard Dow.

Detective Mozrall's investigation into this matter also demonstrated
that this incident was deliberately botched in 1982.

At one point, the New Hampshire Attorney General's office was preparing to go forward to a Grand Jury with this case, but then abruptly decided not to move forward.

Then HB 1499 followed, in order to help prevent lies in criminal investigations, but Kelly intentionally withheld information that proved that Gregory Floyd lied about Killing 43 people in Vietnam as well as whether he even served in Vietnam, and whether he spoke to Liko Kenney before shooting him, and whether the window on the passenger side of Liko's car was up or down, unanswered questions about this windshield bullet Floyd fired from across the street.

Interestingly enough, I remember the Dow case from when I was much younger. The story goes that the victims were placed in a SAAB of all things, after they wre murdered before the car was lit on fire. Next time I go to North Country I better leave the SAAB at home; rent a damn Toyota.

Posted by Christopher King at 6:02 PM

A comment from NH Indy Media puts things in perspective:

"There's too much deference to cops in our society.

Even when a politician like an AG wants to go after a cop for their crimes, they still have to worry about a negative reaction by the public. Combine that with the fraternity-like nature of police departments, and you end up with widespread abuse that leads to cases like these."

Yeah I'm in touch with the owner of the Dow Murder site; yeah we have a lot to talk about.

You won't be reading about it here, or anywhere else for that matter but the results will be felt.