KingCast presents: 127 Steps to Justice; police cause man to be a victim of violent crime.

One Hundred Twenty-Seven. That's the number of entries in Michael Isreal v. Hensley and Rhodes, the two cops who jacked him up, juked his joint for DWB and exercising his First Amendment Rights for telling them "Y'all know you pulled me over for driving that Northstar Cadillac.... but let me tell you I know how you can get you one of them...."

Followed by a hand to the throat, which fortunately did not impair his singing abilities as you hear him sing Negro Spirituals loud and clear in "American Lawyer One."

Sometimes Justice takes a while (the Civil Suit in his case took 2 years to settle) but we will fight for it in Franconia until we perceive that we have obtained at least a modicum of honesty. Yes the still is Vintage KingCast, probably 1997. Gotta love the court reporter archetype.

28 August 2015 Update: Mr. Isreal must have a court hearing today 28 August 2015 because the Courts and an insurance company are all up in my shit. Look below where they want to know more about me representing Mr. Isreal against some piece of shit cops. Piece of shit? Yup. One of them, William R. Hensley has a documented history according to the Cincinnati Inquirer from 28 Jan 2003, some fifteen (15) years after we sued and settled this little fuck was still terrorizing the neighborhood. I saw this a few weeks ago and wrote Attorney Jeff Mando about it. What a piece of shit.

They didn't uncover a goddamn fucking thing. We did that. Us two niggers on the Ohio Plantation did that. Rest in Peace Jerry Doyle you are with us always. 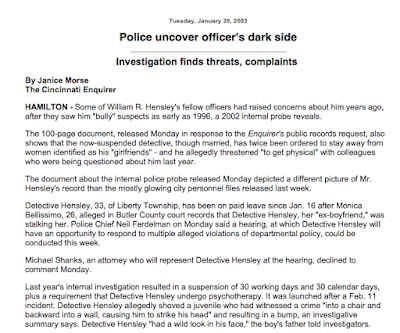 Posted by Christopher King at 3:05 AM

The prosecutor who did not shake my hand was the guy. The lady and I were friends and had mutual friends; used to hang out. She shook my hand and said "Nice job, Chris," and we had a beer over it.

The man who shakes my hand and calls me the "Johnny Cochran of Columbus" is Minister Donell Muhammad, leader of Mosque #43 where they held press conferences for my clients and me, not because we were Muslim (I'm not) but because he knew I fought for oppressed peoples of all races, and he respected that.

PS: Parliament of One sent me news about a friend of hers who befell the same fate as Mr. Isreal, despite being a teetoller as well. It's in the comments section.