So now Duke rape case Prosecutor Mike Nifong claims he has new medical evidence and has set it forth through some questionable recently-produced notes from Sgt. Mark Gottlieb. My position on that case has been clear: Irrespective of the rape allegations, NAACP needs to investigate because the neighbors have said they heard nigger this and nigger that being hurled by these 99% white men of privilege, dammit. And the evidence on the alleged charges is a separate and distinct matter that will come to light in due course. Duh.

Now I don't know if Sgt. Gottlieb's recent evidentiary barrage is as untimely as the "new evidence" I received just prior to my last trial date in the ridiculous attempted extortion/theft charges against me for writing a Demand Letter to the (soon-to-be former) Jaffrey, NH Police Chief, but let's hope for Justice's sake that the new evidence is actually new evidence and not inadmissible hearsay or some other form of State-imposed bullshit. As a former Assistant Attorney General myself, I hate it when the State issues lies to frame someone.

Here's what I mean, bean: In Gloria Timmons' Depo. she flat out told me (post #1 and #2) that she had a sworn and signed affidavit from NAACP Veterans' Chair Cleaven Ferguson. That was a lie, however, because on the eve of trial -- and many many months after said affidavit was allegedly signed and in Timmons' possession -- my lawyer (former Hillsborough County lead prosecutor David A. Horan) and I received a copy of what purports to be an "Affidavit," but which is really just a bunch of words on a page with no sworn attestation whatsoever. Even then it does not declare that I lied about my license status to the NAACP.

So then, at the bottom of this post the real affidavit appears on the left, the bogus affidavit is next to it, and the relevant Depo. pages are to the right of that, one and two. She's clearly a lying pig and my lawyer is going to roast her like one at trial -- which is why she tried to shut down my site for telling it like it is. Watch the "Day in Nashua" short film at KingCast.net captured the day we whupped her ass on the bogus "stalking" charges she levied against me to try to shut me down.

But apparently not in New Hampshire's cracker country , holding a rally today that has drawn the concern of the Anti-Defamation League.

Small wonder Prosecutor Albrecht and Chief Dunn have , both taken unscheduled pit stops of indeterminate duration in this public lynching. 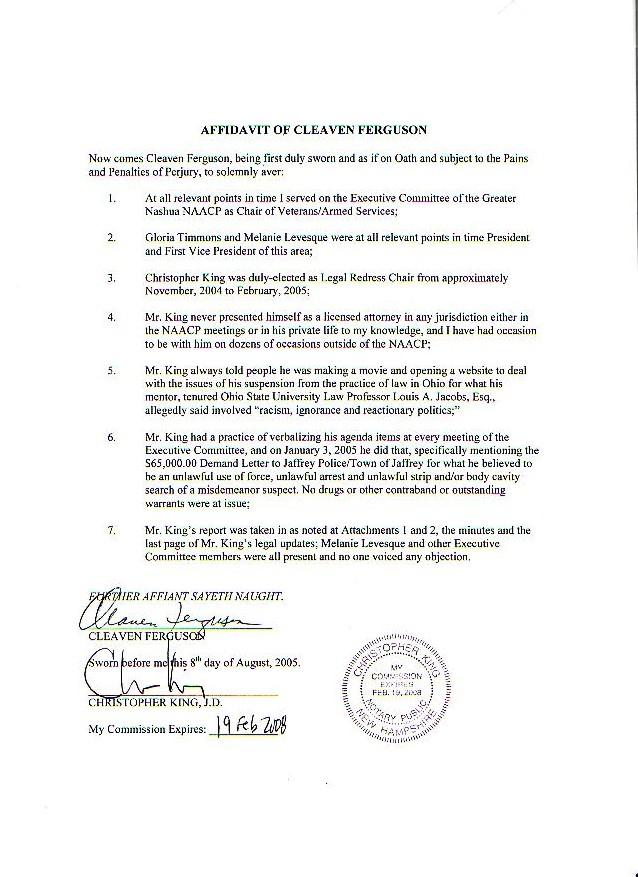 Posted by Christopher King at 6:46 AM

It’s amazing how just by claiming a person to be a “mother” puts a “halo” on her head. Feminist claim that some women have no other option to provide for herself and her children which paints a picture of a selfless martyr, but this is misleading especially regarding this particular “single mom”. This single mom and her children live with their grandfather so the threat of being homeless or hungry is unlikely. This single mom has been arrested in for larceny and evading police, which doesn’t fit the mold of “martyr”. This single mom arrived at the party inebriated and was found drunk and disorderly in a parking lot, but looking at this woman as an individual instead of a sexist stereotype reveals a more realistic picture of this single mom which dims her halo.
Feminist go on to rant that criticizing this woman “hinges on blaming the victim”. This single mom is not a victim. This single mom is an “accuser”. There’s enough evidence to question her integrity and whether a crime actually occurred. I find it hypocritical that feminist so easily gives this “single mom” the benefit of the doubt while condemning a group of boys who happen to be on a sports team. People should avoid stereotypes and focus on each individual, including the “accuser”, as a person.
The actions of District Attorney Mike Nifong have been reckless and irresponsible in playing out this case before the national media. This has inflamed racial stereotypes throughout Durham which makes it more important that everyone take a step back and let the police do their job. If this woman lied; thus exposing Nifong as a fool, then she should be prosecuted for this crime, which have destroyed these young boys’ lives and reputations. Being a “single mom” shouldn’t be an excuse to condone this type of behavior.

Rape shields were created in the 1970s to protect the alleged “victim” from having her reputation ruined by baseless assumptions, unfair judgments, public humiliation, and character assassinations, but any of this could describe what’s happening to every member of the lacrosse team.
Irresponsible “special interest groups” have held protests everyday holding the name and pictures of anyone on the lacrosse team, to having their pictures and hate slogans pasted all over school. The actions of these groups against these men are nothing short of harassment and unfair character assassination.
Media hungry District Attorney Mike Nifong stated he is positive a rape has occurred, but he isn’t sure if it’s by the members of the lacrosse team, yet he obtained an order to get DNA samples from only the members of the team, then he stated on a national news program that the lacrosse team has a “rowdy” reputation on campus – obviously playing up to sexist stereotyping of jocks to further play his case for the media. As Nifong continues to publicly massacre the characters out his case for public consumption, he claims that the team is “stonewalling the investigation” because they claim not to have any knowledge of what transpired, but is Nifong now believing the men to be telling the truth as he recently changed his tune stating that even if the DNA evidence clears these boys that he’ll have other evidence.
Opportunistic political groups have descended on Duke’s campus using unscrupulous methods to get media attention at the expense of innocent young men who happen to be on the lacrosse team. Young men who were too recently, only boys not yet ready to handle this ugly side of the world. In today’s climate, we need the rape shield laws extended to protect all the innocent, including those who just happen to get in the way of media hungry district attorneys and opportunistic political groups.
District Attorney Mike Nifong’s should be held accountable for the irresponsible actions he’s taken in this rape investigation.

As I've stated, I'm not making any representations as to the probative value of the evidence --except to say that this Johnny-come lately offering by Sgt. Gottlied appears suspect -- but what I am here to ask is why do these men of privilege feel free to drop the nigger-bomb on her?

I grew up with young men and women of privilege and they didn't play that shit.

So even if the young men are not guilty of rape, it doesn't mean that you can exactly put halos over their heads, either.

And as far as prosecutors go, asshole is as asshole does, I guess. As a former AAG myself I find the actions of Nifong and Albrecht in my case morally reprehensible (Albrecht and Chief Dunn held a big-time press conference in my case, too) and I tell it to their faces, straight up.

They can get as mad as they want to about the things I say on this Blawg, but they can't point to me lying Under Oath or laughing about somebody being gang raped.

Of course the lies under Oath and the ridiculous abuse of process attempts to lock me up using a notice of appearance by Charlie Bauer not even sent to my address meant nothing to Superior Court Chief Justice Robert Lynn, who tells me as much in the video attached to this post:

Just as it didn't matter to the police at Columbus Schools that my old videographer had broken no laws, in the same video:

"Don't matter," says the police officer, 3 times in a row.

"The school board entity wants you to leave."

So did Judge Lynn.

So when I left, I came right here, which is precisely why he said, at the open of the video, that it is "unfortunate" that bloggers have access to courtroom and broadband.

Face it: Nine times out of ten, without a lot of money or a lot of clout, the U.S. Justice system is a joke because it is totally biased in favor of the government and the monied, and as such, is everything it claims not to be.

Did you hear about John Mark Karr has been cleared of any wrong doing in the JonBenet Ramsey case? Someone should suggest this case to Durham’s DA Mike Nifong. The DNA doesn’t match and the story is full of holes and inconsistencies. This sounds like a case Mike Nifong likes to sink his teeth into.

He-heh.... Nifong and Albrecht can fight over it.

Oh, wait.... Albrecht is gone -- he would have been the natural choice, since he likes trying to prosecute bullshit outside of his own damn jurisdiction:

But with him and his snappy little police escort, soon-to-be former Jaffrey Police Chief Martin J. Dunn missing in action: