NAACP Trial: Where are officers Perrine and Feyrer? 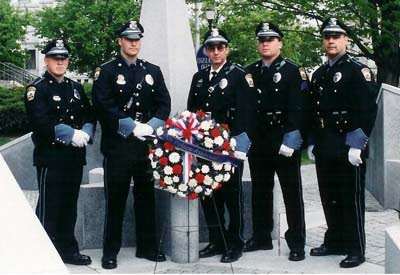 So where are these guys who stuck 3 police guns in the Willie Toney's face, conducted a visual body cavity search and charged him with.... drumroll please.... loitering?
Jaffrey PD page indicates they are long gone. Notice the bottom of the second page where it clearly reads 4 lines up from the bottom that Luis (the white, unarrested guy they knew was with Willie Toney) told the cops they were there to wait on his girlfriend -- ipso facto not loitering. And the only reason Toney - who wants to see a movie and contrary to Chief Dunn's "victim pool" statement is not upset with me - gave them his alias is because that's the name under which his priors were listed. If he had given them his real name and they found out later they prolly would've beat him with a rubber hose! Listen to Willie explain it during his court hearing in the audioblawg above, including the fact that he didn't really run from these undercover white men; he just happened to have his d*ck out to urinate. If anything, they should have charged him with indecent exposure and let that be that.

Watch Mr. Toney and me walk and talk in the "Live Revolution" trailer, and you will also see NH Union Leader writer Steve Seitz take notes to a story they never ran, even though he told me in an email that he submitted it. Also, on the issue of Deposition transcripts being posted on line, I just watched "Lawyerman" again one last time before the new podcast site goes up with even better production values. It's a 4-minute gem. Hats off to studioDHARMA, you are one bad M-F, jack.

PS: They have both/moved to Antrim, where Feyrer, pictured, is Chief. Honestly I wish them both all the safety and luck in the World. But I still think they made a mistake with Willie Toney, and for Chief Dunn to imply that Toney doesn't have grounds for a complaint is simply ridiculous.

PPS: But oooh, oooh, Mr. Kotter, it gets better, said Horshack:
At p.1 Officer Perrine Identfies Toney's roomie as "Fred" 3 lines up from the bottom, and on p.2 Feyrer calls him "Luis" while noting the lack of identification. Therefore the white boy didn't need any correct identification but that nigger Willie got his ass opened up a bit, huh? I retract my no-swearing zone for this post; what we have here is an Orange-zone terror alert against Justice: F*ck anybody who condones this nonsense. And some detractor of mine said I forgot all about Willie Toney. Pshaw. I just save the best for last.

Posted by Christopher King at 8:42 AM

How long is the stretch Willie Toney is doing for the wiff?

He got 1.5 I think, not sure what that translates into for Real Time. Curiously, his lawyer did not want him talking to my lawyers the day we got him and NH Union Leader reporter Steve Seitz on video at the end of the "Live Revolution" video.

But he obviously talked to me and then to Seitz for at least 15 minutes and you see Seitz scribbling notes from what I told him that Willie done tole me.

I'm scanning the annotated version of the police reports now so you can see the Real Deal.

This is a bullshit prosecution, and Chief Dunn who says the complaint "does not exist" is lying. Wait until Devon Sawyer, J.D. takes the stand. Mr. Sawyer and Ana Crnilovic-Phillips, Esq. both got fired by American Tower for supporting me and standing up for employee rights.

And Sawyer gave me the damn matchbook with Willie Toney's name on it that Mr. Toney's friend carried with him the day he went to Mr. Sawyer's office at a certain Personal Injury firm in Worcester, Mass to seek help for Willie Toney.

And the name partner in that firm and I were real cool until he realized that his buddy Richard C. Van Nostrand was no friend of mine.

Here's the poopy on Van Nostrand, whose butt I just kicked after Blogger reviewed the matter and reinstated the post that "scoundrel" had removed:

Curiously? Duuuuude. You strike me as a decent sort, but you screw up alot. Can you blame them? If you are as hot a ticket as your blog says, you are a lightning rod for trouble. Let's be practical. That gal who called you dangerous was not far off from where I am sitting. Remember, client first.

My clients and other workers always came first, and what they wanted a lot of the time in Columbus was for me not to take the quick easy buck, but to make folks sweat. Besides, that's good for Defense lawyers, right?

Unless you are also going public while you keep their feet to the fire.

What I did by helping to initiate that little revolution at American Tower cost them $300K and a forever-watchful Department of Labor monkey on their back.

So from my perspective that's not "screwing up" anything. That's just good advocacy, lawyer or activist or what have you.

Besides, looks like Van Nostrand is the one that screwed up; Blogger agrees and you read this post you'll see when it comes to me at least, he's a piece of shit; has to be to try to get anywhere because he's got nothing on me:

This site is so nice. Really i've been checkit for a wile. Here's some info about the Sony Ericsson tennis tournament history. If you like to visit my page it will be a pleasure. Or if know some one that likes to know about this, givethem this link. Will be nice to had some users like you with sites as good as yours. On August 29, 2006 Sony Ericsson Mobile Communications announced the signing of a four year contract worth $20 million to become the title sponsor of the Sony Ericsson Open. The Sony Ericsson Open is currently the largest tournament in the world with Title Sponsorship. When Butch Buchholz established the event in 1985, it marked the first time in 56 years that a new two-week tournament featuring men and women was launched. Located in Delray Beach (Laver’s International Tennis Center) in 1985 and Boca Raton (Boca West) in 1986, the tournament found a permanent home in 1987 on Miami’s Key Biscayne. In 1994, Miami-Dade County christened the Tennis Center at Crandon Park, a 30-acre expanse that is transformed each year from a public tennis facility into a full-fledged festival for the Sony Ericsson Open. The Sony Ericsson Open was awarded “Tournament of the Year” by the ATP for five consecutive years and seven of the last eight years and in 2004 by the Sony Ericsson WTA Tour and is considered one of the most prestigious titles in professional tennis. In 1999, the tournament was purchased by IMG.
The only combined 12-day Tennis Masters Series event on the ATP and Sony Ericsson WTA Tour calendar, the Sony Ericsson Open features the world's top-ranked pros - 96 men and 96 women in singles competition, and 32 men's teams and 32 women's teams in doubles action. The men’s final is a best 3-out-of-5 sets with every other match in both men’s and women’s singles and doubles a best 2-out-of-3.We specialize in hard to find or sold-out sports tickets, concert tickets and theatertickets for sporting and entertainment events worldwide. We provide great service whether you want to buy tickets or sell ticket. We buy and sell sports tickets, concert tickets and theater tickets on the secondary market such as Sony-Ericsson tennis tickets, US Open and othertennis open event tickets. We are not affiliated with or sponsored by any of the teams, performers, artists, box offices, venues or organizations for which we are providers. Trademarks and trade names have been used within this web site for descriptive purposes only. If you would like to buy tickets from the official distribution outlets, venues or organization box offices, please inquire directly with them.
The best place to obtain tickets for: Sony ericsson open, NCAA Final Tournament Four, acc tournament, big east tournament, at: http://www.ticketsofamerica.com