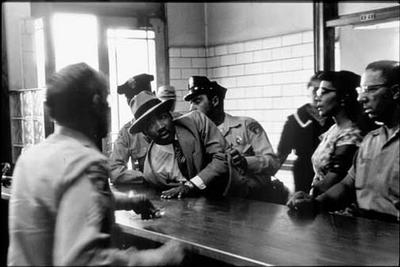 I woke with a start this morning. Sarah looked at me immediately: "What's wrong...." A look of indelibly deep concern immediately registered on her face. "What's wrong," I said, "is that I just dreamed I was saying goodbye to all of my friends from school and telling them to watch their children and to watch themselves because you never know when the thought police will come for you..... what's wrong," I continued, "is that they've already made me a statistic.... you got 25% of black males under some kind of ward of court status...." that is a statistic my friends and I used to tell at-risk youth in the first non-profit group I started, the "Education Coalition." This is what Arthur Ashe and I talked about as he extorted, oops, I mean exhorted me to get to law school, which I did, graduating just weeks after his death. Yeah, I had a probation officer for a few months in high school 20 years ago primarily because I cut class all the time to play tennis & hang out. Funny, I don't recall extorting anything from anybody, except maybe a can of tennis balls for a beer, but isn't that called offer and compromise? Do you have to be a licensed lawyer to engage in that sort of activity? One would hope not.

So those creeps have f*cked with my dreams a bit, got in my head. Given the history of dissidents in this Country and the hidden emails in this particular case that Chief Dunn's attorny Charlie Bauer failed to bring to Superior Court that are very/very/ugly I have every right to be concerned. But you know what? Come time for trial, I will sit in that chair and roll the dice. And I will have plenty of media there for my lawyers my film maker and me to show the World the truth about their missing emails and their bullshit lies, including, but not limited to, "We didn't know what he was doing," and "The NAACP does not sue, or threaten to sue any party." And one reporter recently told me that Prosecutor Bill Albrecht, who failed to provide such emails to me in criminal discovery, even though they were sent to his client, is bucking for a new position in Judicial Ethics. Interesting. This together, is our legacy, fellas. Let's see how we want to leave it.

They got the other King. They got Lenny. Muhammad silenced Malcolm just prior to his journey to Mecca. They got Eugene. They got Ali. They drove Paul crazy and killed Che Guevara, then they shot those boys and girls at Kent State.

Chris King and his network of acquaintances will employ every legal means not to let that happen now.

Peace.
Posted by Christopher King at 7:15 AM